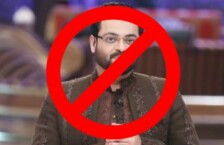 After a controversial video of Bol TV’s programme broadcasting criticism over a religious question came to light, Pakistan Electronic Media Regulatory Authority (PEMRA) on Friday banned Aamir Liaquat for hurting ‘sentiments of different sects’ and creating sensation ‘through unwarranted drama on the basis of religion’.

“Dr Aamir Liaquat shall not appear on Bol News or any other satellite TV channel in any manner whatsoever,” the prohibition order said.

The media watchdog warned strict action, including suspension or revocation of license, in case of non-compliance.

On Thursday, Liaquat took a video call from Gujrat, India, in which a controversial question relating to the religious sects was asked at which he bashed the caller while the content was aired live and un-edited.

This is not the first time Liaquat has been banned from appearing on TV. In January 2017, PEMRA banned him and his programme ‘Aisay Nahi Chalay Ga’ on Bol News after he levelled allegations of blasphemy against ‘disappeared’ civil society activists and bloggers on his programme. Islamabad High Court had also temporarily barred the TV host from making any television appearances.