Flanked by Chinese Ambassador and Speakers of National Assembly and Senate,Nawaz Sharif in a simple ceremony switched on the solar-powered building.

In his short speech at the parking area of the House, just beneath the solar panels, Prime Minister not only appreciated the conversion but also encouraged others to follow the example to meet the growing demand of the electricity in the country.

“This the first time since independence (1947) that Parliament has become self-sufficient in electricity through solar power.
Other institutions in private and public sector need to follow it,” he said.
Prime Minister said that the projects under China Pak-Economic Corridor will be completed on time.

“This is another example of Pak-China friendship, I’m monitoring all the projects under CPEC and Chinese Ambassador is also monitoring them, these projects will be beneficial for China, Pakistan and the whole region,” he said.
He said that some of the projects in powers sector are in final stages and some will be completed next year.

He said that by the year 2018 his government will overcome electricity crisis.

The project to convert Parliament on solar power was initiated in 2014 and was launched last year when Chinese President Xi Jinping visited and addressed the Parliament.

According to Parliament officials, Pakistan’s Parliament is the first in the world to run entirely on solar power.
Israeli Parliament is being run on solar but it is only 10 per cent of total power consumption, said Project Director Shahid Shaukat.

As much as 3,940 solar panels of 255 watts each are installed on the rooftop and parking area of the Parliament building, covering roughly 10,000 square meters.

At rooftop 0.
3 MW electricity is being generated while at parking area static solar panels are producing 0.
7 MW of electricity.

The project was initiated in April 2014, and was inaugurated by Chinese President Xi Jinping and Prime Minister Nawaz Sharif during the former’s visit to Pakistan last year.

For the last two weeks, the Parliament House is generating green energy.

During winter daytime, the Parliament House consumes around 0.
7MW, while at off peak hours, the requirement is 0.
05-0.
06 MW.
In summer the consumption shoots to 01 MW.

According to Project Director this is the world’s cheapest solar power project and it’s per watt cost has been calculated at Rs 300.

The actual project cost is almost half but the cost almost doubled as Chinese engineers and other crew flew to Pakistan, the official explained.

The new project is sufficient electricity to meet the essential power requirements of the House.
This is the first project of net metering, where surplus electricity is sold to the distribution Company.

Nepra has granted a flat tariff of Rs 13.
22 for the Parliament meaning that it would sell electricity to the distribution company at the same cost as it is buying. 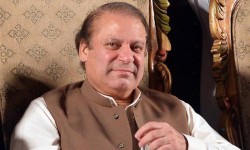