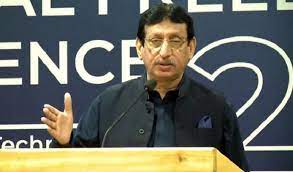 Federal Minister for Information Technology and Telecommunication Syed Amin-ul-Haque said on Tuesday that Pakistan is becoming an important hub for the best IT talent and global IT organizations in terms of time zone.

“Partnering with Pakistan, the fifth largest and most populous country means partnering with a huge repository of capable and delivering youth,” he in his key policy address at the Ministerial Conference of the International Telecommunication Union (ITU PP-22) in Bucharest, the capital of Romania, said a news release received here.

He said, Pakistan had always been open to partnering in all areas that were mutually beneficial for all the stakeholders. It certainly included technology as one of the preferred undertakings.

Amin said; Pakistan had geared itself up for rapid adoption of Information and communication technology (ICT) to deliver the socio-economic development of the country which was committed to the country’s people.

Pakistan has vastly improved on programs to serve the rural community in a more effective manner. “With respect to our Wireless Broadband Access program, provision of LTE technology has been made a mandatory part for the delivery of services. Country has increased the coverage and data throughput which will eventually benefit the end user” he added.

Reducing the sector’s emissions and following the approach of Green ICT UN’s SDG Goal 7 (Clean Energy), all Universal Service Fund projects now require Operators to power up their infrastructure through Solar Energy. The Fiber Optic program has evolved as well.

The minister said, “We have introduced the OPEX subsidy, Rationalized (subsidized) Tariffs and Access to Health facilities.”

He said in the last 4 years, since ITU PP-18, have been our busiest with respect to Universal Service Fund‘s (USF) outreach. Only in this period, we have contracted 79 new projects which is double the number of projects we did before this period since inception which was way back in 2007. The total coverage to more than 15000 rural/remote villages and 27.8 million people has been enabled in this period.

The government envisions digital Pakistan “To bring Social and Economic Prosperity and Citizen Empowerment through Digital Transformation of Pakistan”. The government is working on a holistic digital ecosystem for Pakistan with advanced concepts and components for the swift delivery of next generation digital services.

Highlighting the Digital Pakistan vision, the IT Minister said; the implementation plan will position the nation for accelerated digital transformation, matching the pace of leading economies, resulting in greater economic opportunities, efficient public administration and governance structures, and the improved socio-economic well-being of its citizens.

While working on Pakistan’s digitization roadmap three key principles on sustainability are not being ignored which are Reduce, Reuse and Recycle are referred to in our official meetings as 3Rs.

Stating regarding Flood situation in Pakistan Syed Amin-ul-Haque said that despite being lowest on global carbon emission ranking, Pakistan is one of the largest affectee of climate changes in the world.

Recent floods in the country have been devastating and the havoc left behind is beyond explanation.

He further said that, the governments around the globe need to learn today from the tech sector; how emerging apps and platforms are empowering consumers to make more informed decisions about lifestyle and consumer choices. It is time to appreciate, acknowledge and adopt the thought process emerging out of today’s tech innovation which is a product of the 4th Industrial Revolution. We are in the process of automating citizen services on modern lines in order to bring efficiency in the governance at every level.—APP