No Option Left Except Holding A Sit-In: Naaru’s Mother 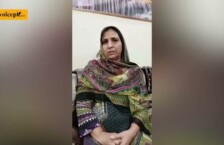 ISLAMABAD:  Yet another lamenting mother joins ‘the group’. Rahat Mehmood, mother of missing journalist Mudassar Nauru, says she has no option but to hold a sit-in with the mothers of the other missing persons after state authorities told the Islamabad High Court on Monday that a cabinet panel investigating her son’s disappearance became dysfunctional following the resignation of then Law Minister, Azam Nazeer Tarar.

Displeased with the responses of Additional Attorney General (AAG) Munawar Iqbal Duggal during the hearing of cases pertaining to the recovery of Naaru and other missing persons, the newly-appointed Chief Justice Amir Farooq gave directions to fix the cases of missing persons for hearing before a divisional bench.

Duggal told the court that a committee, constituted by the federal cabinet, held eight meetings with the families of the missing persons but became dysfunctional when Tarar resigned.

The chief justice maintained that the new law minister could have overseen the matter. “Will the committee cease to exist if the government changed tomorrow?” Justice Farooq asked. “Should the case also end now that the former chief justice of the IHC has ascended to the Supreme court?” he further stated. “There are no results, even if there have been efforts,” Justice Farooq remarked.

The chief justice stated that if the AAG wants to do nothing then the court should be informed, and the cases would be disposed of.

Imaan Mazari, counsel for Naaru’s mother, said the prime minister had appeared before the high court and given several assurances. She said a report on the PM’s behalf was supposed to be submitted to the court today. The AAG stated that the committee needed more time.

The chief justice questioned how much more time was needed for these cases, which were already pending for two years.

Nobody listening to us: Naaru’s mother

Speaking with Voicepk.net, Naaru’s mother said she was very disappointed with today’s court hearing. “I have met two prime ministers and approached all forums for the recovery of my missing son but nobody is listening to us,” she said.

Naaru’s mother said there was no point living in a country whose top representatives chose to ignore the plight of a mother seeking recovery of her son.

She said the only option left for her was to hold a massive sit-in demonstration along with mothers of all missing persons to call for the release of their loved ones. “If the government does not come up with details of Naaru’s whereabouts on the next hearing, I will hold a protest sit-in with mothers of other missing persons by blackening my face and donning dust on my head,” she added.

In the hearing, Col (r) Inam-ul-Rahim, counsel for two missing brothers, argued that the AAG had repeatedly asked for more time, He said the prime minister should issue executive orders for the recovery of missing persons. He said the authorities should follow through on production orders for 450 missing people.

Expressing displeasure with the AAG, the chief justice directed the AAG to think as a human being about what happens when a family member goes missing. The father of two missing brothers stated that his sons went missing from outside the International Islamic University Islamabad, and had still not been recovered.

The chief justice questioned what the investigating officer’s (IO) findings were regarding this case as he expressed indignation at the IO of the Sabzi Mandi police station. The IHC directed that the cases should be fixed before a divisional bench and adjourned the hearing of the case.