No headway on Pemra complaints pending with courts -
ISSN 2226-7492

No headway on Pemra complaints pending with courts 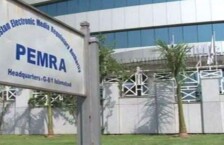 ISLAMABAD: The National Assembly Standing Committee on Information and Broadcasting was Monday told that 680 cases were pending with courts related to complaints filed with the Pakistan Electronic Media Regulatory Authority (Pemra) against different individuals in the media and television channels.

The cases were stuck up as the courts granted stays to the petitioners. During the meeting, Secretary Information and Broadcasting Zahida Parveen categorically stated that the ministry and the Pemra had not imposed any restriction on the media freedom.

The committee was informed that the Pemra had taken action against certain television channels for airing news content in violation of terms of their licences issued only for the purpose of showing entertainment programmes.

The meeting was chaired by MNA Maiza Hameed in absence of chairman Mian Javed Latif who was called by the National Accountability Bureau (NAB) for investigation. The committee was told that an amount of Rs87 million given by the Sindh government for purchase of transmitter for Khairpur radio station in 2010 was instead used to pay salaries and pensions of employees of state-run radio in 2016 by the then director general because of financial crunch.

MNA Nafeesa Shah had raised the issue of transmitter for Radio Khairpur and expressed her displeasure at the diversion of funds.

The committee chair ordered an inquiry into the matter to fix the responsibility. DG state-run radio Samina Waqar said funds given by the Sindh government for installing the transmitter in Khairpur could not be used as the federal finance ministry had refused to treat it as a loan by the Sindh government. “We are going for digitalisation and a transmitter will be installed in Khairpur for the radio broadcasts,” she added.

Managing Director state-run TV Aamer Manzoor said Pakistan and Turkey had an agreement for exchange of dramas, adding that they were in the process of dubbing a very popular Turkish drama for the local audience.

He gave an in camera briefing to the members of the committee about the pending demands of employees. Discussion on four bills relating to media, state-run TV and official news agency was deferred as the movers were not present in the meeting.

Some of the members complained that the media was crossing lines by intruding into the personal lives of legislators. MNA Kanwal Shauzab quoted a recent incident in which a television channel aired the whole morning show about the wedding of son of a parliamentarian.