ISLAMABAD: Federal ministries have not provided 39 categories of information required under the 2017 Federal Right of Access to Information Act, 17 ministries have not set up websites and 29 have performed poorly in complying with the proactive disclosure clause, a study revealed on Wednesday.

A study titled Impeding Transparency, Accountability and Access to Information: Inactive Government on Proactive Disclosure was conducted by the Institute of Research, Advocacy and Development (IRADA) and released in connection with the International Day for Universal Access to Information marked on Sept 28.

The study said federal ministries poor compliance with the act’s proactive disclosure clause has impeded transparency, accountability and access to information as a result.

According to the report: “Proactive disclosure is the action of making government and public bodies’ records or information available to citizens for review without their need to make a formal access request under access legislation, including [Right to Information (RTI)] laws. Compliance with proactive disclosure requirements is the litmus test of the commitment to not just transparency and accountability but to good governance.”

The study found that of the 29 ministries with websites, most perform from poor to bad in terms of the 39 mandatory categories of information they must proactively disclose.

Even the best performing ministry in this regard, the Ministry of Finance, scored below 50pc in compliance with proactive disclosure requirements.

According to the law, each public body is required to public and upload to the internet information and records detailed in section 5 within six months of the commencement of the act.

Since the law was enacted on Oct 2, 2017, all public bodies were to proactively disclose this information by April this year. However, most public bodies are lagging behind greatly in ensuring their online presence or, if their websites exist, by providing a limited amount of information.

“The right to information empowers citizens to optimally benefit from all recognised rights and to claim others. It also makes governments and public agencies accountable and transparent.

Former senator Farhatullah Babar, who played an important part in the passage of the RTI law, said that the law remains inactive for two reasons. First, he said, the information commission that was to be set up in six months to address complaints against non-compliant bodies has not been established.

Second, the law requires all public bodies to public and upload basic information such as their actual expenditure, revisions in budget, supplementary grants, performance and audit reports and so on. This too was to be done in six months.

“Go and ask how many contracts were given to entities like [Frontier Works Organsation], [National Logistics Cell] and other bodies without bids, how much has been spent over and above the budget, and you will draw blank.

“The basic reason is that the civil-military bureaucracy thrives in secrecy to avoid accountability. But democracy is about rule of law, transparency and accountability,” he said.

Mr Babar argued that citizens must therefore keep trying to tear apart the shroud of secrecy to promote transparency and accountability no matter what the odds by resorting to the RTI law.

Even if no answers are given, those thriving on secrecy will be exposed and in time also punished, he said. 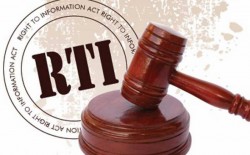