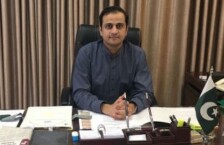 Adviser to Sindh Chief Minister on Information & Archives, Law, and Anti-Corruption Establishment Barrister Murtaza Wahab said on Sunday that by covering the Sindh Literature Festival media should highlight the positive image of the country, especially Sindh.

He said that this was the fourth time that the people of Sindh voted for PPP to govern the province. The Adviser said that the government of PPP will take stand for the rights of the people Sindh at every forum.

The Adviser said that Sindh government had already filed a petition in the Supreme Court against the decision of handing over of the health facilities of Sindh to the federal government. He told that the total budget of the NICVD has reached to Rs 12bn. He said that the Sindh government was doing its utmost to provide best possible facilities to the people of the province.