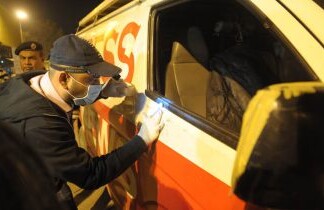 Away from the cameras and newsprint, a wave of fear and foreboding has swept through the media in recent weeks and months. Last week, in the killing of three Express News employees by the Taliban in Karachi, many of the industry’s fears coalesced bloodily – and few expect the threat to recede.

In a series of conversations with Dawn, senior journalists offered their views on why, at this juncture, the Taliban are trying once again to intimidate the media and also shed some light on the behind-the-scenes pressure that is being brought to bear and that is rarely made public.

“If the focus was on news before, now it’s on views,” Mushtaq Minhas, co-anchor of Bolta Pakistan on Aaj News, said. “(The Taliban) want to dilute the growing state and society narrative against them and want to impose their own narrative.”

Minhas claimed that the growing sophistication of the Taliban’s media operations – both in terms of putting out their own message and closely monitoring the electronic and print media in Urdu, English and regional languages – has meant that the Taliban are alert to growing public and media criticism of the TTP and the possibility of an impending military response by the state against the TTP.

Several journalists, who declined to be named, specifically mentioned Omar Khalid, the TTP Mohmand leader, and the deputy leader of the TTP, Khalid Haqqani, as being especially media-savvy and intent on intimidating the industry.

The public clash of narratives has also exacted a toll behind the scenes. Privately, journalists tell of TV anchors and media bosses who have moved their families abroad or increased private security manifold.

Seated in his office at a distance from its large windows, a small precaution against a potential blast or sniper’s bullet, a senior journalist told of an increase in threatening phone calls and text messages sent by the Taliban – and not just to senior or high-profile media personnel.

“It’s not just us, the faces on TV. They know the personal numbers of in-house employees, the desk in-charges; the people no one outside the organisation or a small circle would know about. Who is giving them these numbers?” the journalist asked, leaving his question unanswered.

As ever, in the murky world of the Taliban and its many offshoots pursuing agendas of their own, it is not always clear why certain media groups and personalities have incurred the Taliban’s wrath.

In some cases, such as Hamid Mir and Hasan Nisar’s, the Taliban’s calculations may be more apparent. “I’m a target of everyone,” Hamid Mir said ruefully. “That fatwa, with mine and Hasan Nisar’s picture at the top, well, with me they (the Taliban) say that, most recently, I promoted Malala. And with him (Nisar), it could be the sectarian issue or that he is seen as pro-Musharraf or that he uses strong language.”

But M. Ziauddin, the executive editor of the Express Tribune, said the Express media group is unsure why it has become a repeated target of the Taliban. “The sectarian thing could be a reason. But the Urdu channel and newspaper coverage is not very different to the other mainstream competition.”

With full and proper explanations yet to be mooted, the vortex of conspiracy has spawned some darker theories about the true origins of the campaign against the media. “Who does it suit, intimidating the media to give the Taliban narrative more airtime?” a TV news director asked, speaking on the condition of anonymity. “It’s obvious: the establishment.”

The director claimed that a by-product of the media’s growing criticism of the Taliban in Pakistan is that it has affected how the Afghan Taliban are perceived.
“You hear the anchors saying it more and more, ‘Enough of this good Taliban, bad Taliban nonsense,’” he said.

“But it’s 2014 and all eyes will be on Afghanistan, so they need to keep the Taliban narrative alive, to keep it legitimate. They are stakeholders, remember?”
Whatever the true origins of the threat to the media, this much is clear: journalists expect little respite. A newspaper editor said, “My understanding is that (the TTP) intend to make a big impact by targeting a big media house or a leading anchor or editor to assess the reaction.”

The editor continued: “The failure of media houses and journalists to draw up a joint strategy and raise a collective voice goes in the TTP’s favour. It’s only a matter of time before they carry out their first major attack.”