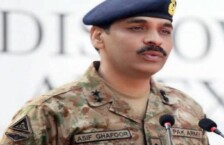 Speaking at PTV, he urged media to show responsibility and observe national values. He said all institutions worked together to defeat terrorism and achieved success.

Earlier on November 19, Chief of Army Staff General Qamar Javed Bajwa has called for evolving a national response during his interaction with the participants of national security workshop at GHQ. “We are now confronting hybrid conflict where focus is shifting to subversion on religious, sectarian, ethnic and social issues. This needs a comprehensive national response”, he reiterated.

He emphasised the need for a greater responsibility to ensure that our people, especially youth stay aware and steadfast against propaganda onslaught being launched through soft offensive.

“It’s our time to rise and progress and we must grasp the opportunity achieved after countless sacrifice”, said the army chief.

Army Chief was of the view that Pakistan had been subjected to various threats especially during the last two decades but Pakistani nation and its armed forces have bravely and successfully stood up to these challenges and is on a positive trajectory to defeat it effectively.