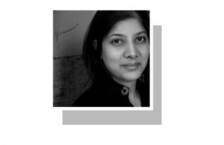 THE Pakistani media’s tragic flaw is that rather than cover the story, it is too often part of the story. So it is again with regards to media coverage of last week’s TLP protests. All stakeholders — the government, the protesters, the public — had strong opinions on how the media should cover the mayhem. And as often happens, all stakeholders were disappointed.

As the protests gained momentum, the de facto media blackout was observed. Those who value press freedom find blackouts discomfiting; they are after all a form of censorship. They invite the kind of outrage that rightfully followed the decision to ban TV broadcasts and block social media outlets during the Faizabad episode in 2017.

But absolutism falters when people incite murder, violence, civil disobedience. Even those who abhor censorship concede that broadcasting trouble spurs more trouble. Excessive media coverage of provocative statements and protests can lead to even more widespread unrest. In this case, media regulation would have also prevented coverage of some protest leaders’ incendiary statements.There is little sympathy for the media’s dilemmas.

But what about accountability to the public? Such a blackout means that citizens remain uninformed about the nature, scale and location of protests, impacting free movement and public safety. Moreover, there is now scant public record of a three-day period of nationwide vandalism. Citizens seeking compensation for loss of property will sadly find no evidence to back their claims in media reports.

In such sensitive situations, the media’s knee-jerk response is to follow the government’s lead. But what are outlets to do when the government’s communications on a tense situation are more inept than those of the agitators? Consider how the PTI’s federal and public representatives offered contradictory statements on negotiations, while the TLP spokespeople emerged as more accurate sources of information.

These conundrums left the media in the crosshairs of a conflicted public. Some wanted the media to block anti-state voices; others derided the media for failing to cover the protest leaders’ statements, deeming it part of a wider conspiracy. Still others took matters into their own hands, with Pakistani Twitter users rallying the social media platform to ban Khadim Hussain Rizvi’s handle.

Of course, there is little sympathy for the media’s dilemmas. The industry is still accused of irresponsible coverage and debate and, because of this, of being complicit in the targeting of some political personalities. Social media users were also quick to point out that channels that last week refused to air TLP statements were happy to echo the party’s rallying cry and glorify its leadership during the Faizabad sit-in and in the run-up to elections as part of a wider effort to undermine the PML-N.

The media’s about-turns on the party, Aasia Bibi and the blasphemy laws more broadly have several drivers. A main one is the fear factor — media personnel know that few other issues can spark death threats and mob violence as rapidly, and prefer to err on the side of caution.

Another driver is the fact that the industry, ultimately, also comprises several individuals whose reports reflect their ideological positions. The Supreme Court verdict in the Aasia Bibi case has been divisive, and emotions run high on both sides. The media is not isolated from the society on which it reports, and reflects the same schisms as the public.

These drivers explain why the debate has been around how the media covered the protests, and not the verdict itself. Few have asked why the media didn’t explain the verdict’s legal argumentation or defend its constitutionality. In today’s Pakistan, no one even expects this of the fourth estate. There is no place for such wishful, naive thinking.

It is worth noting that good ol’ fashioned responsible journalism — the type that strives towards objectivity and impartiality, that is fact-checked and proportionate to the news value of the development, that adheres to existing media regulation — would have saved the media from its dilemmas. It is possible to cover protests in a way that does not contribute to mayhem, and that holds all stakeholders accountable. But we already know that our media does not do responsible journalism.

And we also know that our media is beholden to higher powers. Its vagaries are those of the state institutions that dictate its coverage. The failings of reportage are ultimately a reflection of the failings of state policies.

And so it is that the major story emanating from last week’s protests was about protesters stealing bananas from a child’s cart. This is what media coverage looks like when the fourth estate cannot engage in the politics and ideology inherent to a story. With hints of civil unrest in the air, with extremists pitted against all state institutions, all we get is a bunch of bananas.