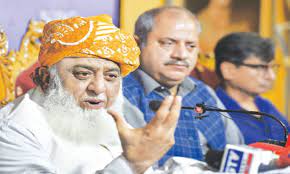 ISLAMABAD: Pakistan Democratic Movement (PDM) head and chief of his own faction of the Jamiat Ulema-i-Islam (JUI-F) Maulana Fazlur Rehman on Friday said the Pakistan Tehreek-i-Insaf government wanted to stifle the voice of media through the media authority bill.

But he would support journalist community in their struggle for press freedom, said the chief of the PDM, an alliance of some opposition parties, at a media briefing here at the National Press Club.

The Maulana said that journalism had always prospered and progressed in democracy but dictators and monarchs always wanted to read and watch what suited only them, with the result that journalism was targeted in dictatorships and monarchies. However, he also highlighted the need for reforms in journalism, establishment, bureaucracy and politics. He urged all institutions to operate within their constitutional limits as the role of each institution was defined in the Constitution.

While urging the journalist community to do factual and balanced reporting, the PDM chief said journalism was imperative for democracy.

He then alleged there was a state institution that considered itself superior, explaining that dictatorial mindset had been flourishing in Pakistan while the decline in democracy had accelerated. He said the country had been facing many challenges and held politicians responsible for this chaos. After public meetings, rallies and struggles, the political parties ended up making compromises, he added.

“They [the establishment] know politicians will compromise with them for the sake of power,” the Maulana claimed, adding that it seemed no one was giving due importance to Pakistan.

The PDM chief said there was need to strengthen Pakistan’s economy. The PTI government had made false claims of providing millions of jobs and houses, he said. He claimed that PTI government’s policies had rendered tens of thousands of people jobless besides resulting in demolition of a large number of houses.

Speaking on the occasion, Nasir Zaidi said: “We will break the chains with our strong arms as freedom of press and rule of law is very important for the development of Pakistan.”

The RIUJ press freedom action committee chairman earlier briefed the Maulana on the demands of journalists and said the media bill was a conspiracy against the freedom of press.