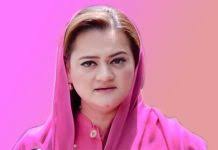 ISLAMABAD: Marriyum Aurangzeb, the federal information minister, has assured the All Pakistan Newspapers Society (APNS) that the present government strongly believes in the freedom of expression, and it will safeguard the freedom of press and address the problems faced by the print media.

The information minister was speaking at a meeting of the executive committee of the APNS held in Islamabad wherein APNS President Sarmad Ali and Secretary General Nazafreen Saigol Lakhani apprised her on the issues faced by the newspaper industry.

They requested the federal government to enhance advertisement rates in proportion with the increase in inflation. They also briefed the information minister on the reduction in the quantum of print advertising and requested that the quantum of govt ads in newspapers be increased by 100% so that the newspaper industry could brave the crisis.

The APNS office-bearers also pointed out that the federal government had not cleared the long outstanding dues of newspapers pertaining to the periods 2008 to 2013, 2013 to 2018 and from 2018 onwards despite various assurances. They stated that during the previous tenure, the APNS was assured that the WHT refunds of newspapers would be released but despite reminders these had not been paid.

The APNS also requested the government to exempt GST on imports of the consumables for the newspaper industry. Marriyum assured the APNS executive committee that she fully supported and agreed with the APNS demands for enhancing the advertisement rates and increasing the quantum of government advertising.

She assured that the long outstanding dues would be cleared as early as possible. She also stated that the issue of exemption of GST and refund of WHT would be taken up with the finance ministry.

The meeting of the executive committee was also attended by Information Secretary Shahira Shahid, PIO Mubashar and other officials of the information ministry.