Law on ‘right to information’ finalized

ISLAMABAD: After toughening up the Right to Information Act-2014, a parliamentary panel has finalised the legislation, which will soon be placed before the federal cabinet for approval.

According to the final draft of the act, a copy of which is available with The Express Tribune, Pakistan Information Commission having powers of a civil court will be set up to ensure and oversee that the general public can have access to information held by all public bodies. Right to information is deemed a basic human right under international law and is guaranteed under Article 19A of the Constitution.

However, due to lack of any effective legislation, Pakistan is among a few countries in the world where there has never been a proper mechanism to acquire information from the public bodies.

Once approved by the federal cabinet and adopted by parliament, the proposed Right to Information Act-2014 would replace a redundant legislation- Freedom of Information Ordinance 2002, which was enacted by former military ruler General (retd) Pervez Musharraf over a decade back.

The legislation, due since long, was drafted a few years back. It has gone through several improvements and amendments in the Subcommittee on RTI headed by Senator Farhatullah Babar. “The finalised RTI Bill will be taken up by the cabinet at its next meeting,” Babar told The Express Tribune.

It covers all the ministries, divisions and their attached departments or sub-ordinate offices, including autonomous bodes of the federal government.

The National Assembly and the Senate, including their secretariats, committees and members, courts, tribunals and any other organisation which performs public functions are also covered under this law. Moreover, any NGO which directly or indirectly receives or has received any benefit involving public funds would also be bound under this law to make their records accessible to general public.

Having the powers of a civil court, the information commission would have all the powers, like taking legal action, power to acquire, hold and dispose of property. It will have powers of inspecting the premises of public bodies, examining and inspecting information. Failure to respect the decision of the commission will be deemed as contempt of court. 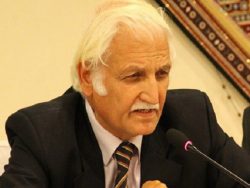 Farhatullah for parliamentary body on freedom of expression