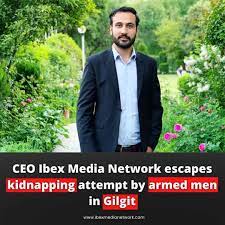 The DigiMAP also condemns the lethargic response by the Gilgit-Baltistan government to the incident and calls for an immediate arrest of the persons involved.

Sabookh Syed, the President of DigiMAP, demanded of the GB government to end its policy of silence on violence against journalists in GB.

It is to mention here that three armed persons attempted to abduct CEO of Ibex Media Network (IMN) Mujeeb Aly late on Friday in Gilgit city.

The incident occurred at about 10.45 pm in the parking area of IMN office at Zulfiqar Abad Jutial, Gilgit.

According to Mujeeb, “I was about to get into my car when three armed persons showed up in the parking area. One of the armed men ‘put me at gunpoint ordering me to keep quiet or else he would shoot me.”

Meanwhile, another man tried to enter the car from the other door. However,  a scuffle between the perpetrator and Mujeeb resulted in accidental fire which prevented the second man from entering the car.

In the meanwhile, Mujeeb said that he was able to snatch the pistol from the person aiming at him.

“On being disarmed, the perpetrators ran away by a motorbike they had appeared to have parked on the roadside,” he added.

Senior journalist and IMN Chief Editor Shabbir Mir said the incident was horrific as it involved attempted kidnapping. “It was first of its kind in Gilgit-Baltistan,” said Mir about the incident.

The chief editor said that he was shocked over the government’s indifferent attitude towards the heinous incident.

“After three days, there isn’t any official statement from the government condemning the incident,” said Mir, adding neither CM Khalid Khurshid nor did the minister of information take any notice of the incident.

The incident has raised serious questions over safety and security of journalists already working in difficult circumstances, Mir added.

It is to mention here that IBX media is an online media platform working on public interest issues in Gilgit-Baltistan. The media platform is quick in raising voices for voiceless people of the region. Due to its critical journalism, the media platform and its team often face criticism in official circles.