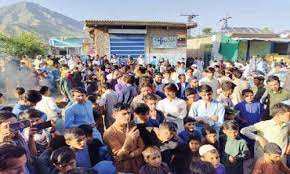 KHYBER/BAJAUR: Journalists demonstrated in Khyber and Bajaur on Sunday against the detention of a colleague, and demanded his immediate release.

The journalists accompanied by political and civil society activists held a demonstration at Bab-i-Khyber in Jamrud.

They announced complete boycott of coverage of all official events and local parliamentarians till the release of their colleague.

They alleged they were denied any information about the unlawful incarceration of Khadim Afridi, who was picked up from Bara on May 13 by the Counter-Terrorism Department sleuths when he was on way home from the local press club.

They sought judicial commission to probe the alleged involvement of Khadim Afridi in any subversive activity.

Meanwhile, mediapersons in Bajaur also demonstrated against the detention of Mr Afridi. Members of different print and electronic media outlets participated in the protest held outside the Bajaur Press Club.