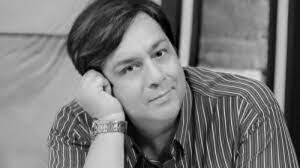 Famous Journalist and photographer Tony Navaid Rashid died today. He long worked in the entertainment sector. People admired his charm and personality, and he was a guy of many abilities.

In addition to being a host, Tony Navaid Rashid was also a photographer, actor, and singer. As we watched him interview a variety of artists that we enjoy watching, we noticed that he was working on his music more and more.

Tony Navaid Rashid was somewhat of an authority on ancient Lollywood and was well-versed in all the intricacies and details of early Pakistani cinema. According to news reports, he died this morning. Fans who have been seeing his entertaining personality on screen as well as his friends and family were shocked by this. AMEN! Inna Lillahi Wa Inna Illaihi Rajioon!

Mishi Khan and Maria Wasti, two of his close pals, expressed their sorrow at his early death: