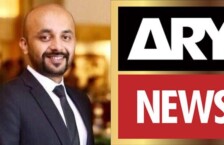 KARACHI: The government in yet another action against ARY News has picked up its Head of News, Ammad Yousaf from Karachi, ARY News reported.

According to details, ARY’s Head of News Ammad Yousaf was arrested without a warrant from his residence located in Karachi’s DHA.

Police officers along with plain-clothed persons forcibly entered the house of Ammad Yousaf. The raiding team diverted the CCTV cameras of Yousaf’s house, and jumped into the house from the top of the main entrance.

The raiding team also took away the licensed weapons and the DVR of the CCTV cameras installed in the house.

The arrest of Ammad Yousaf is being strongly condemned by journalistic organizations and press clubs across the country.

The Pakistan Federal Union of Journalists said in its statement that the government should come to its senses. AH Khanzada said that they condemn the actions against ARY group. If the government does not stop its action of victimizing ARY News, there will be nationwide protests.