Hamid Mir Back On TV Screens as Ban Lifted 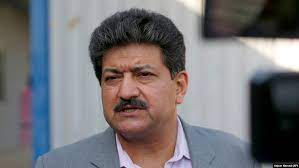 Senior journalist Hamid Mir has returned to Geo News nine-months after he was forced off the air for delivering a speech condemning the attack on journalist Asad Toor.

The announcement was made by PPP co-chiarman Asif Ali Zardari during a press conference on Tuesday. Mir will reassume his role as host of Capital Talk, which was being hosted by Munib Farooq in his absence.

Mir was taken off air after he delivered an impassioned speech during a rally outside the National Press Club in May 2021. Mir had spoken out against an attack on journalist Asad Ali Toor by unknown assailants. Although he later apologized for the speech, he was taken off air by Geo TV management.

Journalists took to twitter to welcome the journalists’ return.

Let me share a good news with you that [Hamid Mir] has returned to [Geo News] to host Capital Talk,” said reported Murtaza Ali Shah, sharing a video of Zardari’s press conference.

According to the International Federation of Journalists, Pakistan ranked as the fifth most dangerous country for journalists. IN 2021, Reporters without borders ranked Pakistan as the 145th country out of 180 countries on its world press freedom index.