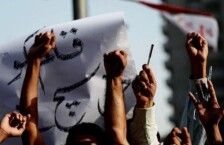 KARACHI: The Pakistan government intensified its clampdown on the media, opposition parties and non-governmental organisations last year, according to a report by the Human Rights Watch (HRW).

In the 30th edition of its World Report 2020, the HRW reviewed human rights practices in nearly 100 countries.

In Pakistan, women, religious minorities and transgender people continued to face violence, discrimination and persecution, with authorities often failing to provide adequate protection to them or hold perpetrators accountable, it noted.

The report said the government cracked down on members and supporters of various political parties. Several leaders of opposition parties, including former heads of government and cabinet ministers, were arrested over corruption allegations.

The media, it said, operated in a climate of fear that impeded coverage of abuses by both government security forces and extremist armed groups.

“Media outlets in Pakistan came under increased pressure from authorities for perceived criticism of the government. In some cases, regulatory agencies blocked cable operators from broadcasting networks that aired programmes critical of the government,” the report said.

“The Pakistan government is failing in one of the basic duties of a democratic government — providing an enabling environment for free expression and critical voices,” said Brad Adams, Asia director at HRW.

“Prime Minister Imran Khan’s government should focus on addressing longstanding human rights issues rather than muzzling those who bring attention to them,” he added.

The HRW report said it received several credible reports of intimidation, harassment and surveillance of various organisations and their staff by government officials.

The government used various regulations to impede the registration and functioning of international humanitarian and human rights organisations, it noted.

According to the report, lawyers and human rights groups expressed concern over denial of due process and fair trial rights after several opposition leaders were arrested on corruption allegations.

In 2019, it stated, the Pakistan government failed to amend or repeal blasphemy law provisions that provide pretexts for violence against religious minorities and arbitrary arrests and prosecution.

The report said that while numerous cases of violence against women and girls highlighted the difficulty survivors faced in getting justice, authorities succeeded in enforcing some key reforms.

The HRW claimed Pakistani law-enforcement agencies “were responsible for human rights violations including detention without charge and extrajudicial killings”. Pakistan failed to enact a law criminalising torture despite its obligation to do so under the Convention against Torture, it said.