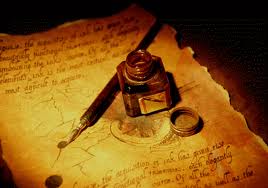 KARACHI: It was so heartening to see Ghalib Library brimming with students and scholars of literature on Saturday evening where they had gathered to remember Ghalib, Faiz Ahmed Faiz and Mushfiq Khwaja. The three were bracketed together because of the month of February. Ghalib died on Feb 15, Faiz was born on Feb 13 and Khwaja passed away on Feb 23.

Befitting the fervor shown by the organisers of the event, poet Naseer Turabi set the tone for the evening by reading out an exceptional paper on Ghalib. He told the audience that the paper was part of the foreword to a book he was writing on the great poet.

Turabi argued it’s not easy to define a creative person because he carried a wealth of emotions (jazbon ka asasa) and was a vibrant entity. It was important to read Ghalib’s letters to know, to a certain degree, his creative self. The poet through the epistolary communication psychoanalysed himself as the letters assumed the form of a dialogue (murasaley se mukalima). He said you couldn’t discover the personalities of Sir Syed and Hali through their letters. Akbar Allahabadi’s letter writing lacked spontaneity and carried an element of melancholy (yaasiat). Iqbal and Shibli’s letters to Attiya Faizi were spontaneous but had more craft. It’s only Ghalib’s dispatches that gave a clue to his personality. In them, his ego and honesty (ananiat aur dayanat) merged delightfully.

Turabi said Ghalib’s individuality eclipsed his self-esteem. His individuality was a result of a conscious attempt. This could be gauged by his peculiar sartorial sense. His wit wasn’t there to camouflage his sorrows, rather it was part of the kind of upbringing that he had.

After establishing the case for Ghalib’s atypical personality, Turabi traced his life from the moment the poet started writing couplets at the age of 11 to the time he passed away. Some of the accounts narrated by Turabi, such as the one when Ghalib was indebted to some people or the death of his children and foster son, were heart-wrenching.

Poet Zehra Nigah was supposed to speak on Faiz. But before that she recited a couplet by Ghalib which she said she had read in Arshi’s compilation and it hadn’t been mentioned anywhere else. The couplet was: Main bhoola nahin hun tujhe meri jaan Karun kya ke yaan gir rahe hain makaan (I haven’t forgotten you my darling But all I see is houses razed to the ground) She claimed it showed Ghalib’s awareness of the political situation in those days.

Zehra Nigah then spoke about Faiz. She said great poets had to be kind or large-hearted human beings. Faiz sahib was one. He never badmouthed or uttered a single word against anyone. When once she asked him why he never got angry, Faiz replied that he too had his bitter moments, but whenever that happened he would switch himself off. He expanded on that saying each one of us had that switch but we didn’t turn it off.

Zehra Nigah told a touching story describing how Faiz was loved by his readers. She said once in London a man came to her with packets full of biscuits. He’d seen Faiz sahib somewhere and had sensed that he hadn’t been keeping well. He requested her that she should give the biscuits to Faiz sahib so that he regained his health. She told that man that he should leave a couple of packets with her and take away the rest, to which he replied that she was sending him back because she thought he’d spent money on buying the biscuits. The truth was that he was only a worker in a biscuit factory and had saved up on the quota that he had of free biscuits as an employee.

Mobin Mirza shed light on known critic Mushfiq Khwaja’s personality. He said Khwaja sahib was an extremely learned man who taught him and his followers a lot of things about literature and also contributed to their intellectual growth (zahni tarbiat). He never liked to project himself as a man of letters and led a nondescript life.

The event was presided over by Fatima Surayya Bajia and Taj Haider was the chief guest. 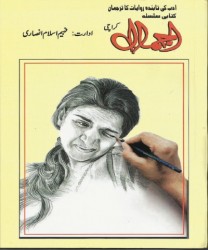 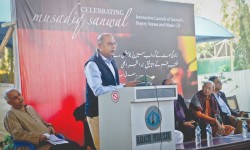 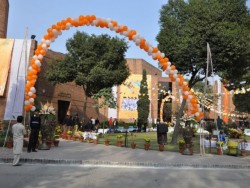 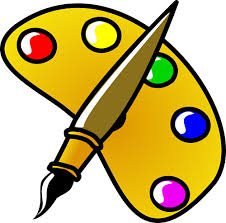