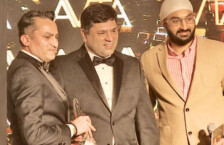 LONDON: Geo News was named News Channel of the Year 2019 at the sixth Asian Viewers Television Awards (AVTA) for the third consecutive year.

Organisers of the event invite viewers each year to vote online for their favourite channels in categories of news and entertainment. The Asian Viewers Television Awards (AVTA) took place in London. This year’s event was the biggest to-date with several influential British Asian industry figures in attendance of the event.

He commented: “I am thankful to all the viewers of Geo brand who have constantly shown appreciation for GEO content. This award is special to GEO because viewers have given GEO News vote of confidence for three years in a row. To lead as the Urdu News Channel of the year is a great honour for the whole TeamGeo.” He added that TeamGeo is known for its hard work, dedication and creativity, making Geo News the leading Urdu news broadcaster globally.

Organisers of the event said the awards event is the only opportunity for the whole Asian media industry to come together once a year to celebrate the success of Asian media industry. They said this year’s awards come at a time when South Asian media, as well media in other countries, face critical issues and challenges. The organisers said: “These awards acknowledge the tremendous amount of hard work that Asian media professionals put in their work. There was no Asian media a few years back and today it has become a strong part of Britain. We organize awards every year to honour our heroes.”