FPW 2018 Day 3: An amalgamation of the old and new | Pakistan Press Foundation (PPF) 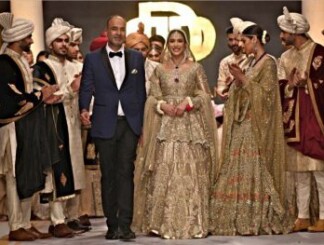 KARACHI: Designer Deepak Perwani closed Fashion Pakistan Week (FPW) on day three with a solo show. Deviating from the usual FPW format, the grand finale commenced with a mesmerising shadow dance. This was followed by a ramp display of the couturier’s collection titled ‘Madhaniyan’ which encompassed a beautiful blend of divine ornamentation in both contemporary and conventional silhouettes.

One after one, models strutted down the runway, displaying exquisitely regal ensembles. The collection was wholeheartedly wedding wear, entailing the likes of decorative embellishments, floral embroidery and intricate adornment within luxurious fabrics. Showcasing the tale of a young girl’s transformation into a bride, Perwani’s compilation comprised everything from long gowns to lehenga cholis.

The modish womenswear was a breath of fresh air as we saw models clad in present-day cuts containing peplum shirts, front-open overcoats and bell bottoms featuring diamantes and pearls on a bed of muted hues. The sophistication continued in the form of silken gowns in various shades of gold. These encompassed the traditional zardozi and florid embroidery on scalloped bodices, with a flowy trail trimmed with cutdana tassels.

Sarwat Gilani turned as the first showstopper, garbed in a heavily bejeweled, belted three-piece suit. She donned a stunning emerald necklace with the attire, bringing in the pop of colour.VERI

Then came the exhibition of more ritual shapes with the catwalk hosting the likes of lehengas and anarkalis teamed with adorning dupattas. These featured embellishments in the form of elephant, peacocks and exotic birds comprising zardozi, gota and floral embroidery with the dupattas bordered with gold kiran.

Accessories included customary maang teekas, including the Rajasthani borlas, as well as maatha pattis, jhoomars and jhumkas. Although most of the traditional outfits had dupattas, some models sported luxurious, velvet shawls decorated with zardozi and pearls.

Actors Mehwish Hayat and Adnan Siddiqui featured on the ramp as the final showstoppers with the former donning a magnificent, fawn-toned ensemble worked with zardozi, diamantes, pearls, sequins, cutdana and embroidery. The sleeves, duppatta and choli’s hem were all scalloped; building on to the femininity of the attire.

Siddiqui walked dressed in an off-white, banarsi sherwani featuring zardozi on the collar. It was adorned with a black, velvet shawl which entailed flamboyant embroidery, minimal gota, pearls and diamantes – exuding true luxury.

‘Mandhaniya’ portrayed garbs in a wide range of colours, comprising vivid tones, pastel hues as well as softened shades. The huge array of tints meant that the collection is able to cater for every kind of bride and groom.

The orchestration of the showcase was truly enthralling with some models walking down the ramp in pairs and others twirling their way to the front. Those in the background posed dramatically against pillars or went about beautifying themselves in front of a tall, standing mirror. It wasn’t just a fashion show; it was a whole experience.