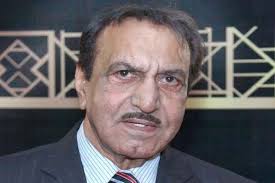 HYDERABAD: Veteran film star Mustafa Qureshi on Monday stressed the need for government support to revive the film industry of the country. “Film is a very potent medium to propagate a message,” he said during a panel interview in Hyderabad.

Qureshi, the iconic actor from Sindh famous for his Punjabi films, said that his film with his son Amir Qureshi will be released on Eidul Fitr.

The octogenarian, having an acting career spanning over six decades, said there was dearth of Sindhi films.

The few films made in the southern province prove that the region is rich in talent, the actor made immortal by his character Noori Nat, a cool, suave, soft-spoken antagonist with a toned body in face of fat, loud, and clumsy protagonist Maula Jutt, played by late Sultan Rahi. Sharing his lifelong experiences, he took the panel of interviewers on a journey through history of film and media of the country.

Regarding his debut, Qureshi said in 1966 he was working at Radio Pakistan. He said though he had gone to watch shooting of Aag ka Darya or The River of Fire, a film about the partition and formation of Pakistan, starring famous actors Mohammad Ali and Shamim Ara, he was offered a role in films and he started film career some 56 years ago.

“Due to the 1965 war, anti India sentiments were high and at the same time I was offered a role of a Hindu youth so I declined it, but on an advice of my mentor, Allama II Qazi, I accepted it,” Qureshi disclosed in a panel interview with this news agency during his private visit to Hyderabad Regarding his earnings at the start of his career, he said his first cheque from Radio Pakistan Hyderabad was of Rs10, while Rs3,000 was his first earning as a film actor.

Though humble from today’s rupee, it is worth noting that a tola of gold was worth Rs68 in 1967. “My first Punjabi film was Char Khoon De Piyase (The Four Bloodthirsty Killers) which became a hit and after that Jailer te Qaidi, License and some other films with Sultan Rahi were released,” Qureshi said and added that Maula Jatt released in 1979 became a blockbuster.