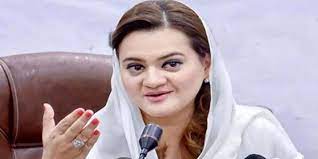 ISLAMABAD: Information Minister Marriyum Aurangzeb on Saturday announced that the plea filed by the Federal Investigation Agency (FIA) for the restoration of section 20 in the PECA Act 2016 has been “withdrawn immediately”.

The FIA had approached the Supreme Court to restore section 20 in the PECA Act 2016, however, it was later withdrawn after some time as it goes against the government’s policy for freedom of expression.

Taking to Twitter, the information minister wrote: “The prime minister and I learned a short while ago that FIA has filed a petition in Supreme Court against the Islamabad High Court judgement regarding PECA Act 2016 to seek restoration of section 20 of the Act. Please note that this petition stands withdrawn immediately, as it is squarely against the government’s stated policy and the principle of standing for and ensuring freedom of expression.”

She also said that PM Shehbaz Sharif has   “taken strict notice of the filing” of the petition.

She shared that the news of the petition had reached them a “little late” as they were in Bisham for the public gathering “during the day where there were no signals”.

A spokesperson of the FIA also confirmed that the appeal has been “withdrawn immediately”.

“FIA without taking the interior ministry and government’s approval had filed the petition,” the spokesperson told Geo News.

The Pakistan Federal Union of Journalists (PFUJ), which was made part of the petition welcomed PM Shehbaz Sharif’s order for withdrawing FIA’s petition.

The journalists’ body said that it has been appealing for an “urgent meeting” of the Joint Action Committee to review the PECA act.

“For cordial media government relations dialogue is the only solution for ensuring right of expression and press freedom,” said the PFUJ.

Before the directives were issued to withdraw the petition, the PFUJ had expressed concern over the plea.

In statement the journalist’s body had demanded the FIA to withdraw the plea and also appealed to PM Shehbaz to take notice of the petition.

“The war of freedom of expression will continue till the goals are achieved,” PFUJ President Sahibzada Zulfiqar had said. He had also “expressed concern” over the “language used in the petition” against the PFUJ.

Earlier, today the FIA had approached the Supreme Court for the restoration of the highly controversial section 20 of the PECA Act 2016.

In its plea, the director-general of the FIA had contended before the Supreme Court whether the Islamabad High Court Chief Justice Athar Minallah was “justified or correct” to strike down section 20 of the act.

The agency had also asked the apex court to examine whether the Islamabad High Court “has not advertently overstepped its legal parameters earmarked” in Article 199. It wanted the court to determine whether the striking of the section was tantamount to “undue intermeddling with the affairs of the federation”.

The FIA had also asked the Supreme Court to examins whether the IHC order was in “direct clash and conflict with Article 184 (3)”.

The FIA had also contended in its petition whether the IHC order was “extending undue favour” to the PFUJ “without any lawful justification, as certain unscrupulous elements amongst them are involved in slinging unbecoming, unparliamentary, defamatory and sarcastic remarks and language upon the law-abiding citizens as well as the honorable judges of the superior judiciary, the hierarchy of the Federation and the State institutions valiant armed forces”.

The FIA contended before the SC to examine that the FIA by issuing such a directive violated “globally recognized landmark legal maxim, i.e., audi alteram partem (hear the other side; one must hear both sides of a case before reaching a decision)”. It alleged that the bench gave full audience to the PFUJ and directed inquiry against FIA officials who were not a party to the case.

The investigation agency also asked the Supreme Court to examine if the IHC order was a “result of misreading and non-reading of the spirit of section 20 of PECA”.

It also asked the SC to examine whether the IHC order had “extended undue, unlawful and unbridled incentive” to the PFUJ “with a clean chit to defame those restricted by Article 19-A of the Constitution”.

The FIA had prayed before the apex court to accept its appeal and “suspend” the IHC order till it hears the case.

Last month, the IHC declared the Prevention of Electronic Crimes Act (PECA) 2016 ordinance “unconstitutional”, including the section of the law. The court had instructed the federal government to investigate the abuse of law and submit a report in 30 days.

The petition against the PECA ordinance was heard by IHC Chief Justice Athar Minallah. The petition was filed by the Pakistan Federal Union of Journalists (PFUJ).

President Dr Arif Alvi promulgated an ordinance in February to amend the PECA law as the government moved to curb “fake news”. According to journalists and experts, the government’s move aimed to silence dissent on social media and control the media.

The media bodies had challenged the “draconian law” in the IHC following countrywide protests.

The four-page order of the IHC stated that free speech protected under Article 19 and the right to receive information under Article 19-A of the Constitution are essential for the development, progress and prosperity of a society and suppression thereof is unconstitutional and contrary to the democratic values.

“The criminalization of defamation, protection of individual reputations through arrest and imprisonment and the resultant chilling effect violates the letter of the Constitution and the invalidity thereof is beyond a reasonable doubt,” said the order authored by IHC Chief Justice Athar Minallah.

The court ruled that the ordinance was promulgated in derogation of the Constitution and the fundamental rights guaranteed thereunder, particularly Articles 9, 14, 19 and 19-A.

“The jurisdictional preconditions were also not in existence,” it further said.

“The Prevention of Electronic Crimes (Amendment) Ordinance, 2022 and promulgation thereof is declared as unconstitutional, invalid beyond reasonable doubt and it is, therefore, struck down.”

The offence under section 20 of the Prevention of Electronic Crimes Act, 2016 to the extent of the expression “or harms the reputation” and the punishment thereof is unconstitutional, invalid beyond reasonable doubt and is, therefore, struck down.

The court also quashed the proceedings against the petitioners.

“The Federal Government is expected to review the defamation laws, particularly the Defamation Ordinance, 2002 and thereafter propose appropriate legislation to the Majlis-e-Shoora (Parliament) for making its implementation effective,” the court order stated.

IHC CJ Athar Minallah also directed the Interior Ministry to probe the conduct of the officials of the Cyber Crime Wing of the Federal Investigation Agency, which had led to widespread abuse of powers and the consequent grave violations of the fundamental rights of the citizens.

The secretary was ordered to submit the report within thirty days.