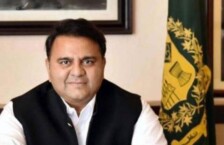 ISLAMABAD: Federal Minister for Information and Broadcasting Chaudhry Fawad Husain on Monday said that Pakistan and Saudi Arabia enjoyed deep fraternal relations based on common faith, culture, traditions and values, and he would like the media dimension added to these ties.

The minister observed this during a meeting with Saudi Ambassador to Pakistan Nawaf bin Saeed Al-Maliki, who called on him here and conveyed the invitation on behalf of the Saudi Minister for Media Dr Majed bin Abdullah Al-Kassabi, who has invited Fawad to visit Saudi Arabia. In his letter, the Saudi minister stated on the occasion of holy month of Ramazan, he desired to invite Fawad to visit Saudi Arabia and perform Umrah and visit the Mosque of the Holy Prophet (PBUH) in Medina. Further, he said the visit would also give both sides the opportunity to discuss ways and means for strengthening media cooperation.

Fawad accepted the invitation and said he would visit Saudi Arabia soon. During the discussion with the ambassador, emphasis was laid on the revival and implementation of MoUs signed between the two countries to strengthen cultural cooperation.

Fawad said that collaboration in the field of culture was imperative to understand each other’s values and for bringing the brotherly people of the two nations closer.

The minister stressed upon the need for enhanced cooperation in the fields of media and information.