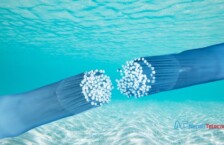 KARACHI: Due to fault in submarine cables, people in different parts of the country faced slow internet speed on social media platforms.

The people witnessed disruption while using Facebook, WhatsApp and other websites that was later confirmed by the authorities.

“There were disruptions both on DSL as well on mobile data but for a few minutes,” Aamir Allawala, the chief executive officer of Tecno Pack Electronics, told The Express Tribune.

A resident of Gadap Town, Soban Hanif, said that he encountered sluggish internet speed while he was working.

Pakistan Telecommunication Authority (PTA) issued a statement confirming that two marine cable cuts were reported earlier in AAE-1 and SEAMEWE-5 near Egypt. The telecom regulator said that the lines have been repaired while another cut in IMEWE near Italy is being repaired.

However, all telecom traffic in Pakistan has been restored to normal. This was not just an issue in Pakistan but was witnessed worldwide.

According to Net Blocks, a global internet monitor, the global network data witnessed disruptions in internet connectivity in multiple countries, with high impact observed in parts of Asia and Africa. “The outages were consistent with a disruption in international transits … incident ongoing.”

“Involving three major continents, the loss of bandwidth is a major issue that must be curbed immediately,” he said. The South East Asia–Middle East–Western Europe 5 (SEA-ME-WE 5) is an optical fibre submarine communications cable system that carries telecommunications between Singapore and France.

“The cable is approximately 20,000km-long and provides broadband communications with a design capacity of 24 terabits per second between South East Asia, South Asia, Middle East and Europe,” Noman Ahmed said.

A cut has also been reported at the SEA-ME-WE 5 cable near Egypt. The last cable to undergo damage is the IMEWE cable near Italy. The IMEWE (India-Middle East-Western Europe) submarine cable is a 12,091km submarine cable system which links India and Europe via Middle East.

Relatively little has been announced by the PTA in regards to the cable damage, however, the massive potential of repercussions remains, Noman Ahmed said.

Soban said he works from home for a digital marketing company and his work was disrupted. “With the idea of work from home growing, internet is becoming more and more important nowadays.”

After the Covid-19 pandemic, working from home is becoming a normal phenomenon in the country therefore internet is becoming more valuable day by day. “Students also use internet to get education,” he said.

“It is necessary to have backup systems in place as issues like these frequently arise as with the cases of the above cables,” Noman Ahmed said. It is imperative for specialized teams to approach the scene and tackle it hastily as loss of connectivity is simply not sustainable or affordable, especially involving losses on such a massive scale.

“We hope our tech teams are henceforth better equipped with the skillset required to tackle such calamities in the future and to ensure a reliable floating measure in place to sustain temporarily during the repair period in order to prevent any losses,” he said.

“Unfortunately, Pakistan has a history of unreliable connection and networks which often causes the masses to turn to the usage of multiple networks in hopes of maintaining connectivity, which is an added expense,” he said. Moreover, there is often great discrepancy in the bandwidth provided by Internet Service Providers.

The PTA may look into the bandwidth regulation in order to maintain speed as it has previously facilitated in similar cases, he said. Bandwidth is one of the major resources of the telecom and IT sector and hence it’s imperative for it to be regulated via policies that the PTA can hence introduce.