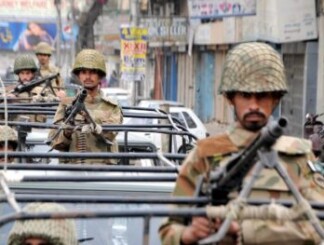 KARACHI: In its latest fact-finding report, the Human Rights Commission of Pakistan (HRCP) comes down hard on the paramilitary force and calls it an agent of fear, instead of an agent of security.

In its report, titled ‘Extra-judicial acts by Rangers in Karachi’, the human rights organisation took up 11 recent cases of abduction, extra-judicial killings and torture allegedly by the Rangers. “In all such cases, the Rangers have abused their power and not disclosed charges against abducted persons,” it observed.

The HRCP report, which has yet to be made public, has declared that the police delayed the registration of FIRs and the cases were only reported on court orders. Also, the police have not found criminal records of any of the cases they looked into, it said. There is a lack of communication between the police and the Rangers, it noted. The commission’s team tried to schedule meetings with Sindh IGP and Rangers director-general to discuss the alleged atrocities of the Rangers but were unable to.

HRCP Sindh chairperson Amarnath Motumal told The Express Tribune that the Rangers have failed to control the law and order situation in the city. “They are a total failure and now they are involved in taking innocent lives.” The courts can play a vital role in taking action against the law enforcement agencies as the police are ineffective in doing anything against their own force, he said.

For Asad Iqbal Butt, another representative of the HRCP, the situation in the city was more like the law of the jungle. “The Rangers found guilty should be punished to set an example for others,” he suggested.
Rangers denies comments

Meanwhile, Rangers’ spokesperson Major Sibtain denied having any knowledge of a human rights commission, let alone its report on extra-judicial killings. “What is the Human Rights Commission of Pakistan?” he asked when The Express Tribune tried to contact him. “I don’t know anything about them.”

The Rangers are sacrificing their lives to safeguard citizens, he pointed out. Last night, they caught terrorists and saved the city from a big disaster, he claimed, adding that such reports will not influence their work.

The HRCP team met families of the missing persons, who have been picked up allegedly by the Rangers, and found out that the police have no prior criminal records on them.

Without naming the political party, the report said HRCP met the families of six activists including the family of Farooq Ahmed, who was abducted from outside the passport office in April by two men in plainclothes. They also met the families of Zeeshan Baloch and Usman Ahmed who were whisked away from a snooker club in May. The three men have not been recovered so far and FIRs were lodged only after court intervention.

The commission also met the family of political activist, Fahim Riaz, who went missing on May 19 but was recovered later. Fahim has now withdrawn the case that was lodged by his family against his abduction.

Ajmal Beg was first picked up by the Rangers from outside a mosque in Railway Colony. He was then later handed over to the Mawach Goth police station. The family told HRCP that he was given electric shocks by the Rangers and the officials wanted him to take the blame for murdering Pakistan Tehreek-e-Insaf leader Zahra Shahid.

The human rights activists also met the families of the taxi driver, Mureed Ali, and 21-year-old Muhammad Bilal. Quoting Bilal’s post-mortem report, the commission said the torture marks on his body were 36 hours before he was handed to the police, which means that the Rangers had inflicted torture on him.