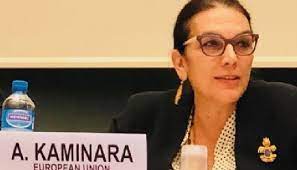 ISLAMABAD: The European Union’s Ambassador to Pakistan, Androulla Kaminara, said that the compliance report for gauging Islamabad’s progress on 27 United Nations conventions was currently under preparation while the existing arrangement of GSP Plus (GSP +) for Pakistan and other countries was going to expire by end of 2023.

“All recipient countries, including Pakistan, will have to apply for renewal of GSP Plus status beyond December 2023 as 27 conventions with addition of a few more form the eligibility criteria for its extension. Pakistan’s progress and compliance will determine its ability to get the status renewed for extended period,” the EU’s Ambassador to Pakistan, Androulla Kaminara, said while addressing a news conference at the launching of the first-ever EU-Pakistan Business Forum for Small and Medium Enterprises (SME) in Islamabad on Wednesday.

The EU ambassador also said that the protection of human rights, press freedom and forced disappearances were the major concerns among others and added no official text related to the Pakistan Media Regulatory Authority (PMDA) was made available. However, an ‘interesting’ discussion was held with the minister for information & broadcasting in a recent meeting, she added.

She said that Pakistan had ratified and signed 27 conventions prior to getting the GSP Plus back in 2014 and a compliance report was being released periodically reviewing progress on the desired objectives. She said that the EU was implementing 100 million Euro grants for different sectors in Pakistan. To a query about the possibility of extending GSP Plus beyond December 2023, she said it would entirely depend upon Pakistan’s progress in achieving 27 UN conventions.

She said that Pakistan’s exports are going up by 7.5 billion Euros every year in the aftermath of GSP Plus, providing millions of jobs. The EU, she said, would prepare an objective compliance report that would be released soon forming the basis for extension of GSP Plus incentives for an extended period. She said the draft policy about extension of GSP Plus would be prepared by the European Commission but it was the domain of the EU Parliament to approve the new policy.

Earlier, during the conference, the DG EU told the participants that the EU would provide a window of 45 million Euro for SMEs in Pakistan till 2023. He said that Pakistan’s SME sector could replicate experiences of the EU markets on account of placing policy framework, access to finance and transfer of technology. The payment delays could prove an important issue for SMEs, he added.

According to a press statement issued by the EU office in Islamabad, the EU delegation launched the first-ever EU-Pakistan Business Forum for Small and Medium Enterprises (SME) in Islamabad on Wednesday. It was attended by representatives of local SMEs from Gems, Jewellery and Mining, Information Technology, Handicrafts and Fashion-wear as well as Travel and Tourism.

The initiative of the EU-Pakistan Business Forum provides opportunities for both EU and Pakistani businesses to work to become engines of development and partnership and contribute to enhancing bilateral trade. During the first Islamabad session, the participants were apprised about how they could benefit from the European Union’s GSP Plus Scheme, which provides duty free access of two-thirds of tariff lines to the EU market with the rest on preferential duties. Agricultural and auto-parts manufacturers will be included in subsequent meetings. Pakistan’s economy consists of almost 3.3 million SMEs comprising service providers, manufacturing units and start-ups. The SMEs make up over 30pc of Pakistan’s GDP, account for approximately 25pc of export generation and provide over 70pc industrial employment.

While in the EU, Europe’s 25 million SMEs are the backbone of the EU economy and provide two out of three industrial jobs in the region. The Business Forum will play a key role in bringing together SME’s from the EU and Pakistan to enhance their export orientation and collaboration in technology transfer and promotion of businesses.

Dilating upon her vision to enable Pakistani SMEs to benefit from a wide range of GSP+ concessions, the EU ambassador to Pakistan, Androulla Kaminara said in order to make it easier for SMEs to operate in the EU single market and beyond, the European Commission removed regulatory and practical obstacles, which provided opportunities for the SMEs to scale up their presence in the EU. “I wish to replicate this in Pakistan and am prepared to help the Government and Pakistan’s business sector to achieve this together. Diversification into other sectors will boost trade and ultimately allow Pakistan to take full advantage of GSP+.” More meetings of the EU Pakistan Business Forum will be held in Lahore and Karachi later this year.