Exhibition on Indus Civilisation kicks off at Lahore Museum

LAHORE: To celebrate the Independence Day of Pakistan, the Lahore Museum arranged a special exhibition titled “Belief and Identity” about the cultural, historic roots of Pakistan.

History related photos, paintings and some of the installations depicting building structures in an artistic way were exhibited in a stylish manner.

A young artist, Mazhar Naveed, a graduate of NCA, had prepared the installations on a voluntary basis.

The exhibition was interlinked with the diverse objects recovered from Mohenjo Daro and Harappa. These objects include the famous Indus seals, potsherds and clay-toys showing the range of activities, high level of urbanisation, culture and civic sense achieved by this civilisation. Various archaeological findings depict a society engaged in active and wide-ranging trade, having a sophisticated town planning system with organised water supply and sewage systems; and multi-storeyed houses built through precisely laid baked bricks.

Lahore Museum Director Sumaira Samad inaugurated the exhibition while Public Relation Officer Nomia Khadim guided the visitors and informed them about the highlights and historic backgrounds of the objects exhibited there. Sumaira said that the installation highlights the continuity of civilisation, the interlinking of the various cultural phases of history and their presence in today’s era.

She said that the visitors were invited to view the installations from their own perspectives in order to place today’s reality into its historical context and to enrich the installations with their experience.

Nomia Khadim said that Pakistan is one of the three great ancient civilisations of the world namely Egyptian, Mesopotamian and the Indus Valley.

She went on to say that in the third millennium BC, the Egyptians were building the Great Pyramids at Giza, the Sumerians were burying their dead in the Royal Cemetery of Ur, and Aegean sculptors in the Cyclades were carving abstract marble statuettes of women and musicians, in the same era, a great civilisation arose over a wide geographic area along the River Indus known today as the Indus Civilisation.

Nomia said that archaeologists had uncovered impressive remains of this great Indus Civilisation.

On this occasion, artist Mazhar Naveed said that his installations were presenting features of the great and ancient Indus Valley Civilisation and its characteristics through contemporary art.

He said that the vertically suspended installation shows flashbacks from history, which reflects the various faces of the Indus Valley Civilisation “depicting our history and heritage and linking with our present day reality”.

He went on to say that various combinations of objects like pottery, seals and clay-toys and their intertwining forms a repetitive cycle in which people revolve through the ages. He said all these objects are used in the installation. “The repetitions of multi-layered orbits form a vase shape, which is a characteristic shape of the pottery from the Indus Valley Civilisation in it,” he concluded. 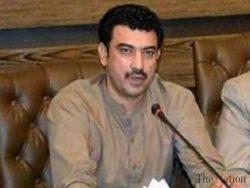