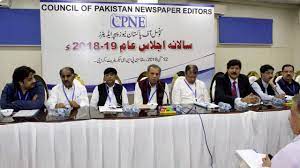 LAHORE: Kazim Khan was elected president of the Council of Pakistan Newspaper Editors (CPNE) in the polls held during the meeting of its standing committee in Lahore on Wednesday.

The meeting condemned the authorities’ high-handedness against media organizations including the unfairdistribution of advertisements, raids on printing presses, and pressurising the media managements on a number of other pretexts. The meeting demanded that newspaper arrears should be immediately paid to ease financial pressure on the media. The meeting passed another resolution to condemn some officers of the Information Department, accusing them of misconduct against the media organisations.