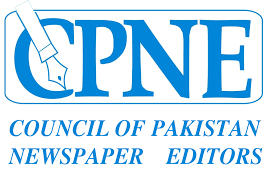 According to a statement issued by the CPNE Secretary General, Amir Mahmood, the objectives of the Editors-Government Liaison Committee include right to awareness, freedom of the press and policies and laws related to the media, problems faced by editors, including economic stability of print media and liaise with the government authorities to ensure transparency in state’s advertisements etc. The committee will report its decisions, recommendations and performance to the Standing Committee of CPNE from time to time.