He was speaking at certificate distribution ceremony of a three-day training workshop organised jointly by Pakistan Press Foundation (PPF) and United Nations Educational, Scientific and Cultural Organization (UNESCO), in collaboration with Government of Japan and United Nations Development Programme (UNDP) at a local hotel.

The workshop was held on theme of Capacity Building of Media Professionals on Balanced, Inclusive and Objective Election Reporting.

Journalists from Karachi, Mirpurkhas, Hyderabad, Sukkur, Larkana, Mithi and other cities and towns of Sindh province attended the training workshop.

The main focus of the workshop was to build capacity of reporters and subeditors to cover the upcoming general elections, while important issues like rights of transgender people, special persons and women; journalism ethics and digital journalism were also discussed, threadbare.

To a question, Yousuf Khattak said the priory of Sindh Election Commission is to hold the general election 2018 in a transparent manner. He said organising free and fair elections is not an easy task.

He urged the journalists to positively highlight election-related issues and improve coordination with the election commission so as to provide error-free details to general public during elections.

He said now due to new electoral lists no voter can cast vote in two different constituencies. He said as election is a national cause, the journalists should positively highlight the polls-related issues.

He informed that a one-day training of District Returning Officers of Sindh will be held on May 16, 2018 in Karachi. 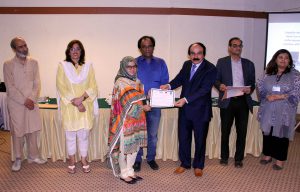 Pakistan Press Foundation (PPF) Secretary General Owais Aslam Ali said this three-day training workshop for reporters and subeditors was first of its kind in the country to enhance professional capacities of journalists.

He said such workshops will be also be organised in Quetta, Lahore, Peshawar and Multan to improve the skills of reporters and subeditors,ahead of upcoming general elections 2018.

He informed that aim of conducting this series of workshops all over Pakistan is to help in increasing the voting ratio of women in the general elections. He hoped these training workshops will bring a positive impact on journalists. Senior journalists and trainer Mubashir Bukhari, human rights activist and journalist Muneeza Inam, trainer Atta Musawir and subject specialists Rao Akram and Arsalan Ashraf conducted different sessions of workshop.