LAHORE: Chief Information Officer Mazhar Hussain Minhas said on Wednesday that it seemed that the provincial government did not want the commission to do its work.

He was speaking at a seminar held on the commission’s annual performance report.

The commission was established in March 2014 – a year after the passage of the Punjab Transparency and Right to Information Act in 2013. The annual report states that the commission was not provided with space to set up its office until February 2015.

Information Commissioner Mukhtar Ahmed Ali said in several instances the commission’s requests for information had been declined by government bodies. He said the commission was still awaiting a response from the Governor’s House on a request sent earlier in the year.

Ali said another problem faced by the commission was the failure of most government departments to designate public information officers (PIOs).

The departments were required to designate PIOs within 60 days following the passage of the PTRTI Act. The report launched on Wednesday stated that after repeated requests, around 1,000 PIOs had been designated in some departments by June 2015.

Ali said most of the designated officials were junior clerks who lacked experience to handle the responsibilities of a PIO. Most departments failed to widely advertise among the public their PIOs’ contact information, he said.

Another problem mentioned by the information officer was a shortage of staff at the commission’s head office. Ali said recruitment to the 43 sanctioned offices could not be done because the government was yet to approve service rules for them. “We had sent a request for approval of service rules for the information secretary’s office in May. We’re still awaiting a response,” he said.

Ali said staff shortage was affecting commission’s performance. “The number of requests received at the commission has increased over time. We need more people to deal with the workload,” he said.

Among the requests for information received by the commission, most were concerned with criteria for promotion and transfer of government officials and grading of exams at universities and colleges. He said most of the applicants who filed requests for information regarding promotions and transfer criteria were employees of the department concerned who alleged discrimination against them.

The seminar was attended by representatives from the media and the civil society.

South Asia Partnership (SAP) executive director Muhammad Tehseen said civil society organisations could help the commission by arranging awareness raising campaigns across the province. “You can use our premises to hold such sessions,” he said. 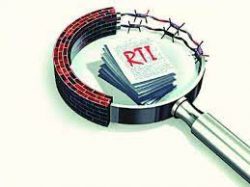