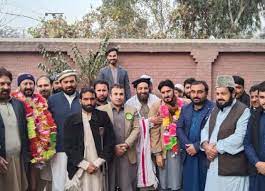 Speaking on the occasion, Bara Press Club President Munir Khan Afridi said tribal journalists rendered matchless sacrifices in the line of duty. He said that the tribal journalists had been facing a host of problems, adding that the former provincial government did not announce any special grant for the tribal press clubs. He added about 15 tribal journalists, including Nasrullah Afridi and Mehboob Shah, were martyred in acts of subversion.