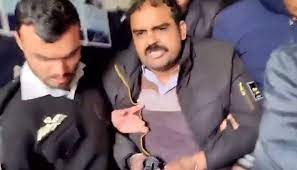 In November, a report published by investigative news website FactFocus — which describes itself as a “Pakistan-based digital media news organisation working on data-based investigative news stories — accused the army chief and his family of amassing assets worth Rs12.7 billion over the past six years.

The report cited tax records and wealth statements of the Bajwa family to corroborate its claims about the alleged accumulation of assets by the family inside and outside Pakistan.

Taking notice of the report, the finance minister had said that the leak was “clearly violative of the complete confidentiality of tax information that the law provides”.

Aslam, who has been arrested in connection with the data leak, was presented before the court of Special Judge Muhammad Azam Khan today.

During the hearing, the journalist’s lawyer requested the court to accept Aslam’s bail application.

Meanwhile, FIA prosecutor Zulfiqar Naqvi said that the journalist had refused to cooperate with the investigation officers and did not share his mobile or laptop passwords with them.

“We have sent the electronic devices for forensics,” he revealed, adding Aslam was arrested for violating Section 216 [harbouring offender who has escaped from custody or whose apprehension has been ordered] of the Pakistan Penal Code.

After hearing the arguments of both sides, the court accepted Aslam’s plea and approved his bail against surety bonds worth Rs50,000.

The case pertains to the report published by FactFocus last year, accusing the former army chief and his family of amassing assets worth Rs12.7bn over the past six years.

The report, authored by journalist Ahmad Noorani, cited tax records and wealth statements of Gen Bajwa and his family to corroborate the claims about the alleged accumulation of assets inside and outside Pakistan.

Aslam has been accused of obtaining the tax records and sharing them with Noorani. The FIA arrested Aslam from Lahore on Jan 13 and later shifted him to Islamabad.

On Jan 14, he was handed over into FIA’s custody for two days. After the completion of the remand, the journalist was sent to jail on judicial remand for five days.