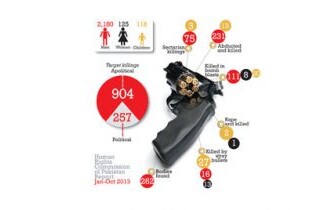 Karachi: The ongoing operation against criminals in Karachi has brought down the number of target killings, but has increased the cases of extrajudicial killings by law enforcers, according to the latest Human Rights Commission of Pakistan (HRCP) report.

“There is a visible decline in the number of targeted killings since the operation began,” Zohra Yusuf, the HRCP chairman, said on Saturday, “but there is almost an equal increase in extrajudicial killings, which is similarly grave.”

Although the report does not specify the number of extrajudicial killings, but she claimed that her organisation had taken notice of the cases where the law enforcers have killed people “based on mere suspicion”.

“We are concerned about the situation and we continue to monitor the development,” Yusuf added.

Ordered by the federal interior minister, the operation against militant wings of political parties and banned religious outfits, including extortionists, land and water mafias was launched on September 5 in Karachi.

The HRCP’s data on criminal activities gathered from media reports showed that the months of September and October were the most peaceful in terms of target killings in Karachi.

The HRCP has released figures compiled from January to October, which separate the killings of every hue from personal to political to sectarian, as they were reported in the media.

In August, a month before the operation started, some 121 people were targeted. In September and October, the numbers were brought down to 73 and 74, respectively.

The data also showed a marked decrease in the killings of political activists since the operation began.

For instance, in August the number of political activists killed was 33, but the figure came down to one-third and stood at 11 in September and October each.

There was a noticeable spike, however, in the number of slain policemen, who are actively taking part in the action against criminal elements.

There was no let-up in the killings of policemen in Karachi, as 26 cops were slain since the start of the operation (17 in September and 9 in October). September was the second bloodiest month this year for the policemen after March, when 25 of them were murdered.

The HRCP data also showed a visible let-up in the number of dead found in the city.

When compared with August, when 52 bodies were found across the city; the number decreased to 28 in September and 33 in October.

But the deaths in Lyari gang war remained pretty much unabated in the last two months. A total of 77 people have died in the clashes between the gangs of Karachi’s oldest neighbourhood in the year. And the month of October was the second deadliest, when 14 people lost their lives.