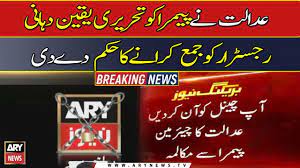 KARACHI: The Sindh High Court (SHC) on Monday directed Pakistan Electronic Media Regulatory Authority (PEMRA) to submit written assurance with regard to resumption of transmission of ARY NEWS after the authority said that it has not suspended the transmission, ARY NEWS reported.

During a hearing on a petition for restoration of ARY NEWS transmission, the court directed the PEMRA to submit a two-line assurance stating that they have no objection on the transmission of the channel.

“We have already directed to restore the transmission of ARY NEWS,” the SHC bench observed and directed the authority to submit a report on implementation upon the court orders.

The PEMRA representative in the court stated that it has not suspended the transmission rather it was cable operators who have shut it down.

However, Barrister Ayan Memon blamed the PEMRA for trying to save its skin while shifting the blame to the cable operators. “A show-cause notice should be issued to PEMRA chairman,” he asked.

The court on the occasion asked if the PEMRA would pay the salaries of the 6,000 employees of the news channel and directed the chairman PEMRA to immediately restore the channel on cable.

The news channel went off air in many parts of the country on Monday evening without any prior notice by authorities.

In a 10-page order, the court also suspended the show-cause notice issued to ARY News by Pemra. The SHC also stopped media regulatory authority from suspending the license of TV channel till the next hearing.

The court also issued notice to Pemra and deputy attorney general and adjourned the hearing until August 17.