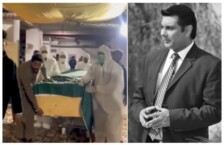 The post-mortem report of slain senior journalist Arshad Sharif was handed over to the family on Monday, Express News reported.

Taking to Twitter, the late journalist’s wife Javeria Siddique said that after receiving the report from the hospital she was now waiting for the Supreme Court to form a judicial commission to probe her husband’s murder in Kenya.

However, the Pakistan Institute of Medical Sciences (PIMS) in Islamabad said that it did not hand over the report to Arshad’s family, saying that it might’ve been given away by the Federal Investigation Agency (FIA).

The journalist hosting the show also claimed that Arshad was shot at close range and that this was not a case of mistaken identity but a ‘planned murder’.

He further claimed that the slain journalist’s fingernails were pulled out and his fingers and ribs were broken during torture.

The senior journalist, on his show, further stated that around ’10 American instructors and trainers’ were present at the shooting range on the day of Sharif’s murder.

Earlier, Interior Minister Rana Sanaullah said evidence suggested Sharif was the victim of a targeted killing in Kenya, not an accidental shooting, though he still needed more information on the incident.

Kenyan police spokesman Bruno Shioso declined to respond to the minister’s comments on the death of the TV journalist.

A police report a day after the shooting said police officers hunting car thieves opened fire on the vehicle that Sharif was travelling in as it drove through their roadblock without stopping.

Shioso said the case was now being investigated by the police watchdog, the state Independent Policing Oversight Authority (IPOA). A spokesperson at the IPOA did not immediately respond to calls and a message seeking comment.

The government had formed an investigation team to look into the matter, which caused uproar in the country. The minister said the team had returned from Kenya, but Kenyan police had not yet given Pakistani investigators all of Sharif’s recovered belongings.