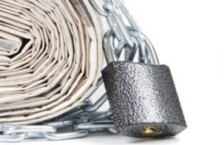 KARACHI: The All Pakistan Newspapers Society has expressed strong apprehensions over the emerging serious threats to the press freedom in the ongoing transition towards the 2018 general elections. While analysing the prevailing state of the media, the APNS has expressed concern over the dangerously fluid position surrounding the press organizations largely due to the intervention of forces external to the newspapers.

Pledging to resist attempts aimed at creating confusion and disunity among the free press, the APNS disparages attempts to exacerbate such influences. The APNS considers 2018 as the precarious year for the functioning of Article 19 of the Constitution, which ensures freedom of the press. In this contentious atmosphere, certain press bodies are attempting to encroach on the APNS sphere of decision making.

The press bodies perform specific functions allocated to them. The APNS sphere of influence is based on its ability to represent the interest of 379 newspapers and 86 periodicals. Its sphere of decision making is defined by matters pertaining to the freedom of press and freedom of expression, commercial matters pertaining to newspaper advertising and recoveries of dues, newspaper circulations and matters pertaining to distribution, and to the general well being and free functioning of the newspaper organizations. The professional editorial concerns of newspaper editors are represented in the Council of Pakistan Newspaper Editors (CPNE); the interests of electronic media organizations are represented by the Pakistan Broadcasters Association (PBA); the interests of journalists by the PFUJ; and that of newspaper employees, in general, by APNEC. The APNS works with all these bodies to preserve the collective interests of the press. But it clearly insists that APNS alone represents the views of its membership in issues of advertising and circulation, which constitute an exclusive domain for the interest of its membership.

The APNS will resist any attempt, by any other newspaper body or organizations, to interfere in their functions and will reserve its option to take any suitable action. The APNS also disparages the distribution of slanderous pamphlets and letters which falsely accuse its member publications of illusory acts. In this respect, an Ethics Committee has been constituted to investigate such allegations and take suitable punitive actions against those found responsible for such behaviour.