All state-run TV channels except one running in losses, Senate told -
ISSN 2226-7492 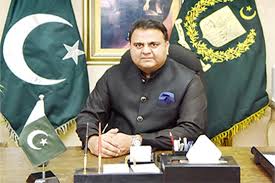 ISLAMABAD: Minister for Information and Broadcasting Fawad Chaudhry told the Senate on Wednesday that all the state-run TV channels except PTV Home are running in losses.

During the question hour in the Senate, the minister said that state-run TV, being a national institution, does not broadcast any Indian content or material. He said that all other TV channels had also stopped airing Indian content. On the question of Senator Khushbakht Shujaat, the minister replied that steps were being taken to make the state-run TV a profitable institution.

While answering a question of Mushtaq Ahmed, Fawad Chaudhry said that 24-hour monitoring of all TV channels was being carried out and it was found that no channel was broadcasting any Indian content.

Fawad Chaudhry, while replying to another question of Mushtaq Ahmed, said that DPO Haripur in his letter disclosed that journalist Sohail Khan was murdered by his two cousins. He said the federal government directed the provinces that they should form their media security committees. He said that federal government was giving final shape to the Journalists Welfare and Protection Bill 2017, which would ensure protection to journalists and their families.