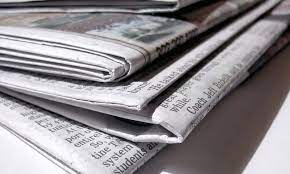 KARACHI: The APNS expresses its profound concern on the news item appeared in a section of press wherein it has been stated that the federal government in the garb of austerity measures, has decided to discontinue purchase of newspapers and magazines for the offices of the federal government ministries, departments, autonomous and semi-autonomous bodies.

Sarmad Ali, President and Nazafreen Saigol Lakhani, Secretary General of the All Pakistan Newspapers Society have stated that the above decision has sounded a death knell to the newspaper industry struggling for survival in the present bleak economic environment. It was an ill-advised as well as a true description of a penny-wise pound-foolish measure.

The APNS office-bearers stated that the decision, if implemented, would have devastating impact on the liquidity conditions of already crisis ridden newspaper industry and would badly reflect on the relations between the present unity government and the media.

The APNS office-bearers have requested Prime Minister Shehbaz Sharif to review and withdraw such anti-media moves which would only save some peanuts but would be highly counterproductive for press–government relations and survival of print media.—PR