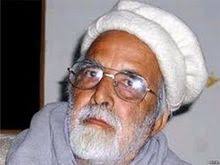 PESHAWAR: The Awami National Party (ANP) leaders on Thursday threatened to resist the bid to introduce the presidential system in the country and scrap the 18th constitutional amendment.

Speaking at a meeting held in connection with the ninth death anniversary of the party’s former president Ajmal Khattak at the party’s headquarters, Bacha Khan Markez in Peshawar, ANP acting President Ghulam Ahmad Bilour said that his party would resist the attempts to scrap the 18th amendment.

He alleged that Prime Minister Imran Khan had been brought into power for doing away with the 18th Amendment to pave the way for imposition of the presidential system of government.

He said that the presidential system may be beneficial for achieving certain objectives but it would prove detrimental for the integrity of the country. “In parliamentary system a prime minister could be deposed but in presidential system it is almost impossible,” he argued. He said that electricityand gas were the resources of the Khyber Pakhtunkhwa but centre had usurped the rights of the province.

He warned the forces behind the Imran Khan government to refrain from trampling on the rights of the people of smaller provinces or else they would demand a new social contract on the basis of the 1940 Pakistan resolution.

Speaking on the occasion, ANP provincial President Ameer Haider Hoti asked the federal government to increase the share of the provinces in the National Finance Commission. He said that increasing the provinces’ share would address the sense of deprivation of smaller units.

He also demanded increase in funds for the erstwhile Fata districts for the development of these under-developed areas.

“Bashir Bilour, Haroon Bilour, Tahir Dawar and Arman Luni all are our martyrs. We need to take unified steps for resolving the problems of Pakhtuns,” he maintained. The speakers lauded the services of renowned Pashto poet and prominent nationalist politician Ajmal Khattak on his ninth death anniversary. Ajmal Khattak was born in 1925 in Akora Khattak, Nowshera. He passed away on February 7, 2010.