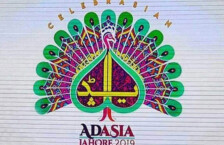 LAHORE: The second day of the AdAsia 2019 was a learning experience for young advertisers as renowned experts from Pakistan and abroad shared their success stories ranging from making advertisement from imperfection to beneficial use of technology to surmounting difficulties against all odds.

The event started a bit late that forced the organizers to skip the tea interval. Tay Guan Hin, a creative change expert from Singapore, said beautiful creations could be made from imperfection in advertising. He said the art of using bad for the good of society pays high dividends. For instance, a car manufacturer asks its prospective customers to contact the survivors of ugly car accidents about the safety of their products. The survivors mostly were driving their brand when their cars were brutally hit by some bigger vehicle.

They all survived because of the safety measures imbedded in that brand. Tay said this brand does not show off the interior or the sleekness of their models but emphasis is on safety. Similarly, he showed a video in which a widow speaking at a function arranged in honour of her husband said that all over her life, she was complaining about the snoring of her husband but when he is gone, she misses those snores.

Bharat Avalani, chief knowledge officer of AFFA, said the foreigners listen to so many horrible things about Pakistan but once they land in this country, their hearts are captured by the locals.

He said the company life span is diminishing because of disruptive technologies. He said that to survive a longer period, the companies have to remain alert and agile. He invited Pakistani advertisers to the 5the World Congress on Advertising. Vange Kourentis gave a presentation on the development of Manchester United as a brand. He said it is a must to appear in partnership and media to increase income.

The best conversation of the day was between two most talented creators in Pakistan advertisement Industry Shahzad Nawaz and Faraz Maqsood Hamidi. The Chairman of the AdAsia 2019, Sarmad Ali, called them the most creative designers in the country. He pointed out that both used Markhor to identify their clients the design of Shahzad was adopted by the ISI but that of Faraz was banned by the Supreme Court of Pakistan. The logo was made for the Pakistan International Airlines. Faraz said Markhor is our national animal and is considered extremely dangerous. He said this ISI logo was meant to predict death for the RAW, the rival spy agency of India. Faraz was at loss as to why his logo was banned.

Shahzad said madness is part of creativity but Faraz disagreed. Faraz also regretted that the national language is ignored at the official level. He said: “We should have turned totally to Urdu in 15 years but have not made any progress in this regard in 72 years.” He said in countries like the UAE and Bangladesh, it is mandatory to use national language in advertisements. He said advertising themes should also depict national interests. On the parting note, he expressed dismay that ordinary Pakistanis are not entitled to hoist the national flag on their premises or vehicles except on the Independence Day. He said the national flag is meant for the entire nation. The government officials or ministers should use official emblem for identity.

Samina Khaiyal Baig is the first Pakistani and first Muslim mountaineer to scale the Mount Everest. She has emerged as a role model for Pakistani women. She shared her experience with the AdAsia audience and was perhaps the most applauded speaker of the event. Samina belongs to a remote village at the border of Pakistan and China. She said it is perhaps the most underdeveloped place in the country that still lacks communication and tap water. She said luckily the village has a girls school where she studied. She said her village is surrounded by high snowy mountains. She was crazy about climbing high peaks. But this sport was exclusively reserved for men. She used to listen to stories of mountaineering adventures from her brother and uncles. She said her elder brother promised her that he will take her to the mountains when she grows up.

Samina said: “We planned climbing the mountain in 2010 and went on a 12-day expedition of a nearby mountain peak.” She said that experience boosted the confidence and she became the first girl in the locality to reach that peak. The next expedition was to Spantec which is at a height of 7020 meters. It was abandoned due to bad weather. “It was in 2013 that we decided to try our luck at Mount Everest,” she said. Unfortunately, there was no one to sponsor that expedition, she regretted.

She said as a girl, she has firm conviction that when there is a will there is a way. Women have the power to surmount all hurdles once they decide to achieve something. “I somehow managed to conquer the Mount Everest along with my brother that year. Throughout our journey, we wore shirts with Pakistani flag and our jerseys also had a small Pakistani flag so that other people could know that we are from Pakistan,” said a beaming Samina. “Since then, I have scaled 7 most difficult mountain peaks in Europe and Asia. Samina proudly revealed that she is the only person among men and women that has hoisted the Pakistani flag at seven highest mountains in the world. Her only regret is that she is yet to expedite K2, the second highest mountain in the world.” She hoped that she would be able to succeed next year as the first mission was abandoned due to bad weather. It is her firm belief that no one can reach a mountain peak until the mountain itself is willing to accept him/her as a guest. She said during one of her expeditions, they had to stop a few hundred meters short of the peak because of bad weather. She said they waited until they were left with three days ration. They slept the night with the aim to go back in the morning but when they woke up, the weather was all clear and they captured the peak. “The mountain wanted to welcome us,” she said with a smile.

She has become an idol for the ladies of this country, particularly the girls in remote areas. She later as a panelist at the session called the world from height. The session was moderated by motivational speaker and corporate trainer Niaz Malik. The other panelists were Cory Richards and Raha Moharrak. Another session on Women and Power Panel was moderated by Ms Atifa Silk while the panelists were Dr Zeelaf Munir of English Biscuit Manufacturer, Fareeha Altaf, CEO of Catwalk Production, Seema Jaffer, CEO of Bond Advertising, and Nabila the stylist and entrepreneur.

He said Pakistan is going to be the hub of advertising globally as the country’s potential and all global indicators point towards this end. “Pakistan is always portrayed in negative light in media, whereas it has so much potential and promise to be the world leader in advertising,” he added.

He said Pakistan has beautiful landscapes, resources, potential of its population, women’s empowerment, traditions and culture, developments and so much positivity about it, which sadly remains hidden from the mainstream media in the world. “The women of Pakistan are going to be the change makers in the near future,” he said, adding that young people who comprised a major portion of Pakistan’s population are linked to promotion of advertising in the country. Some unfortunate events happened in its history that stalled its progress, otherwise Pakistan was growing faster than Japan and dubbed as Asian tiger in the 1960s.

Wille Eerola said all countries are increasingly becoming urbanized and Asia is home to 54 per cent of the world’s urban population. Pakistan has the highest rate of urbanization in South Asia with 36.4 per cent population living in urban areas, which is set to increase up to 50 per cent to be living in cities by 2025.

He said shopping has become borderless with consumers’ access to global marketplace. By the end of 2019, the total value of e-commerce retail sales is expected to top $3.4 trillion. He said Generation Y, born between 1980 and 1994, is technologically very advanced with quite surprisingly broad global reach and they comprised a big group in Asia and in Pakistan. In today’s digital age, he said, the speed of change is 3-5 times faster than the current Internet era. “Generation-A is expected to make it big with this fast digital era, which makes way for growing need for advertising,” he said, adding that advertising technologies, digital data drive, big data, small data, artificial intelligence and more are the order of the day.

For Pakistan, Wille Eerola said, the creativity has a perfect basis for the next jump as today’s technology startups and existing big companies shall form a partnership in the near future. “With market around, Pakistan should be proud of its talent and inherent passion and make the waves in the future of the world,” he said, adding that if Pakistan doesn’t do it now, the other Asian nations shall be ready to replace them in the world of future marketing and advertising.

“The media in Pakistan will have to bring quality in its content, which will be needed and appreciated,” he said.

The countries with highest defence spending will have youth uprising in the next 10 years. “The abnormal spending on defence is destroying economies, increasing poverty and eroding opportunities of employment,” said Raza Jaffer, founder of Global Sustainability Network (GSN), while speaking at a session on “Sustainable Development Goals (SDGs) 8.7: Eradicate Forced Labour, End Modern Day Slavery and Human Trafficking”.

Jaffer said the governments must spend on human development through education and health leading to job creation, employment opportunities, reducing poverty and economic empowerment. “The inclusive strategy will help arrest despondency creeping among the youth in struggling economies with heavy spending on defence,” he said, adding that Pakistan’s work on ending slavery and human trafficking is below average as there are an estimated 3.186 million people living in slavery which keeping in view the total population makes it an estimated 16.82/1000 proportion of the overall population living in slavery besides leaving another estimated 74.12/1000 proportion of population vulnerable to slavery.

He made it clear that there is no dearth of legislation in Pakistan as slavery is inter-connected with so many sectors including child labour, bonded labour, child marriages and others. “Only if we can ensure implementation of laws, slavery in Pakistan will be reduced to half,” he added.

He said the political will is there across political spectrum in Pakistan as he has interacted with former Chief Minister of Punjab Shahbaz Sharif and incumbent Prime Minister Imran Khan and found them forthcoming to act and end slavery and human trafficking in the country. However, he said there is a need for the government, private partners, communities and civil society to work collectively to achieve the goal of ending modern day slavery and human trafficking in the country.

He informed that the Global Sustainability Network (GSN) is working with all relevant stakeholders including leaders of different faiths, governments, businessmen, media, NGOs and academia to help eradicate forced labour and end modern day slavery and human trafficking.

In another session, Marcus Paffers from M&CSaatchi spoke on five principles to pollinate creative and critical thinking among people. He talked about inculcating behaviour change, clarity, neutrality, simplicity and diversity to help end people’s sufferings from social injustices and diseases.

Besides, Niaz Malik, motivational speaker, delivered a motivational talk on realizing one’s faculties and potential and not giving up in adverse situations.