KARACHI: Contemporary art is often accused of being overly hodgepodge in terms of technique. A bit of this, a bit of that, and you make the viewer confused enough to form an informed opinion. A four-person exhibition titled ‘Abstruse Imagery’ curated by S.M. Raza opened at the Art Chowk Gallery on Wednesday.

One South Korean, one Belgian and two Pakistani artists have come together to put up a striking show the salient feature of which is a series of uncomplicated, beautiful artworks.

Kim Yunseob from South Korea expresses how contemporary (not modern) sensibilities make an artist mould their art in order to remain relevant and effective. Mr Yunseob’s digital prints look like just-finished paintings. His subjects are varied but mainly have an urban touch to them. ‘Just Landscape 2’ is a remarkable example of it. The ‘Whale’ series brings to mind quite a few themes, including that of Moby Dick. But in essence it refers to societal shortcomings more than anything else. Then Mr Yunseob displays his versatility through his pencil-on-paper work. His take on present-day banalities is worth mulling over… and marvelling at.

Belgian artist Monica Gallab’s small triptych Carnes Pampeanas (pencil on paper) cannot be looked at or analysed separately to have a clearer understanding of her art. She creates pieces of images, albeit individually self-axiomatic, encourages the viewer to connect the dots and gives them a holistic view. In Carnes Pampeanas, she does not present the human-animal symbiotic relationship as a study but as an artistic lament.

Anam Rafique tackles memory in ‘I Partially Remember’ (neemrung on vasli) and unlike the famous dictum ‘the struggle of man against power is the struggle of memory against forgetting’ examines it with reference to psychological pressures. The artist does a nice job.

Shahan Zaidi seems to be someone whose art is uninhibited and unadulterated. There is angst in him, and it has a method to it. It is readily noticeable. The artist’s ‘Main’ (digital print) introduces the viewer to his world, a world where things are warped and every endeavour proves an exercise in futility. Out of this feeling comes his art — forceful and agitated but never losing sight (instinctively) of the aesthetics involved in the creative process. His first untitled piece (ballpoint on paper) indicates his influences (ranging from Francis Bacon to Edvard Munch) with a hint of fondness for the graphically designed fiction. Mr Zaidi is an artist to watch out for.

The show will continue till Aug 31. 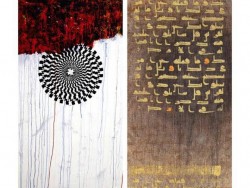 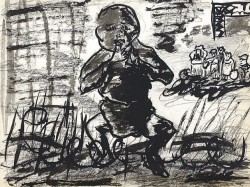