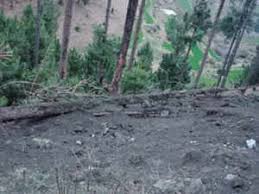 MANSEHRA: A total of 19 trees were uprooted as a result of the February 26 Indian airstrike in two forests near Balakot.

“The Indian aircraft payload destroyed 19 pine trees and newly planted saplings,” said a report released by the Khyber Pakhtunkhwa Forest Department on Friday. The damages report issued by Arif Khan, the sub-divisional forest officer for Siran forest division, said that the army personnel, journalists and locals rushed to the scene following the release of the payloads by the intruding Indian warplanes.

It said that two collector compartments, three and twelve of the Jaba Guzara forest, came under attack. The report revealed that at the time of the airstrike, the forests guards were on routine duty. “This is the initial estimation of damage caused by the airstrike, further investigation is recommended,” said the report.

Initially, the forest department officials had prepared a preliminary report about the damage caused to the trees, but they apparently had not inspected the all the places that came under attack. The Indian aircraft were trying to bomb a madrassa that they claimed was being run by Jaish-e-Mohammad (JeM) but the target was completely missed.