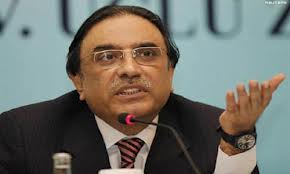 By: Shoaib A Raja

He said, “We have extended the hand of friendship to all political forces, to the media and all stakeholders as well and we feel satisfied that this policy of the government has started paying dividends. He said the government is earnestly addressing issues of media freedom and in this regard a Press Council has been set up and its chairman has been appointed. It is now for the Press Council to move forward and move fast in consultation with all stakeholders,” he added.

President Zardari said this while addressing the opening ceremony of the state-run TV’s English channel. He said Pakistan was a democratic and peace-loving country and its people are hospitable, courteous and hard-working. He urged the need for projecting these characteristics of Pakistanis and positive and soft image of the country at national and international level. He said that independent media was a guarantor of human rights, freedoms and liberties and its role was critical in furthering democracy.

Commenting on the freedom of information, he said that the Ministry of Information has taken the ownership of the Freedom of Information Act as the government believes in providing genuine access to information for the sake of transparency and accountability.

President Zardari expressed confidence that a Senate sub committee and the Ministry of Information are already working on the draft of Freedom of Information Act in consultation with all stakeholders to repeal the old Ordinance of 2002, and bring in a new Act of the Parliament. He directed the Ministry of Information to expedite finalisation of the Bill and table it in the parliament at the earliest. He stated that Shaheed Mohtarma Benazir Bhutto as Prime Minister started the process of liberalisation of the media in the light of her vision It was for the first time during her government that the system of newsprint quota was done away with and it was in his government that cable news in Pakistan were introduced.

Recounting some of the achievements of the Present government, he said that the government has taken far-reaching measures to consolidate democracy which includes giving self-rule to the people of Gilgit-Baltistan, resolving the issue of distribution of resources between the Federation and the Provinces through 7th NFC Award, restoring the 1973 Constitution, reclaiming Swat and Malakand from the militants, fighting terrorists and extremists head on and empowering the parliament in helping frame security and foreign policies. Commenting on the state of economy, he said that although certain sections of the society object to economic performance of the government which he opined are not based upon facts, he said that standard of living of the people was on the improvement which was reflected by the enhanced sale of cars, tractors, motor cycles and other necessities of life. He said that performance of the Karachi Stock Exchange, increased remittances and increase in country’s export shows that economy was not stagnant but was growing steadily and gradually. He however urged the need for more vigorous steps for sustainable economic development.

Commenting on current energy problems, he said that the government was deeply conscious of the energy problem which, he said was result of the circular debt left behind by the previous government. He said that during Shaheed Muhtarma’s second government Pakistan had surplus electricity and were even able to export power. However thoughtless reversal of the energy policy of her government led to the present day power crisis. He urged the need for all political parties and stakeholders to develop consensus on economic policies, particularly policies in addressing the energy crisis.

The president while touching upon steps taken by the government to improve condition of the media, said that present government has taken a number of measures for improving the conditions in media and will continue to take more such actions. He called upon all the stakeholders to work together to improve government-press relations in the larger interest of the country and the people.

Speaking at the ceremony, Information Minister Kaira said the democratic government under the visionary leadership of President Zardari had demonstrated unflinching commitment to the freedom of expression, access to information and informed accountability.

He said the government had unprecedented patience and endurance to the hard hitting criticism by media and independent commentators.He said no journalist was ever victimised on account of criticism in last five years of democratic dispensation.

Kaira said the PPP leadership had taught the lesson of democratic patience and democratic dissent.He said today Pakistan is graduating into one of the most dynamic democracies of the world.He said he attributed the credit for the emerging democratic and political maturity to all political and democratic forces of the country.