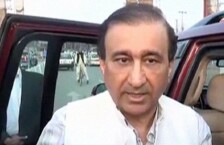 Talking to reporters here at an inauguration of a furniture exhibition, the former PM said the detention of Mir Shakil is a direct and brutal attack on the freedom of the press. He said the arrest of Mir Shakil has shaken the media across the country.

The former PM said this is not the arrest of Mir Shakil, but is an attack on freedom of media and an effort to suppress the Jang Group through tools of biased accountability. He said the media should be free from all types of restrictions, saying in the past the Pakistan People’s Party-led government set precedents for free media.