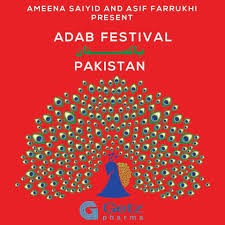 KARACHI: Comedian Shafaat Ali, who was asked to moderate the book launch of Maheen Usmani’s The Mercuiral Mr Bhutto and other stories, said he felt very strange coming to the Adab Festival on Sunday because it was the first time he was asked to host something serious.

Sharing his reading experience, Mr Ali said he does not get much time to read books between his day job and stand-up. He kept putting off reading this book till one day he got home and found his wife in tears while reading the book. He asked her what had happened and she said the book was intense, amazing, with great structure and flow, and it was a must read.

“I looked at the cover of the book and then the back, and noticed that it was a young woman who wrote this and not an old man like Sohail Warraich. When you start reading the book, the first paragraph of the first story which is about Zulfikar Ali Bhutto; it is brilliant,” he said.

Turning to the author, he asked her to talk about the short stories and how she chose her title. “Why a political title for this amazing collection of social stories,” he asked.

“Actually I found this first story ‘The Mercurial Mr Bhutto’, a story which stayed with me for a long time. I used to think about it a lot and I wanted to write about it because all our political leaders are controversial figures and we have a hero/idol worship kind of relationship with them – we don’t look at them as human beings,” she said. “There are many stories that I heard of Mr Bhutto from my father who’s in the government and other people during my research. I saw some videos on him and there were many things that came to my mind so I was like why not write a fictionalized story. There are many things that happened in those days that no one talks about now,” she added.

This story, she explained, was written from the perspective of a child. “She’s seeing the way people are reacting to the news of his death, double standards and high expectations that don’t get realised.”

“A lot of people asked me if this story was pro or against Mr Bhutto. I don’t understand this kind of mentality. It’s like if you are with Imran Khan then you are against Asif Ali Zardari and vice versa. What sort of people have we become, we either hate or love. We have forgotten what nuances are, what shades of grey are,” she said.

Her second story, ‘15 Minutes of Fame’, is about how insensitive people working in the electronic media are – the story focuses on a young middle class man who jumps off a building and instead of saving his life, a camera crew just records the tragic incident in hopes of getting hits.

“I feel that there isn’t much news about the middle class man. Someone getting murdered in Clifton or DHA makes it, but not in other areas. And this was an issue I faced in the newsroom. In the newsroom, everyone only cares about politics,” she said.

The third most striking story in her book is one on child abuse which left the panelist and audience shocked.

Talking about her influences, Ms Usmani said that she had read a lot of Russian and French short story writers before starting work on the book.

Mr Ali was also joined on stage by actress Sarwat Gilani, her husband actor and plastic surgeon, Fahad Mir­za, who read passages from the book.