KARACHI: Indus Valley School (IVS) of Art and Architecture opened its door to showcase the talent and labours of its graduating batch of 2015 on Monday.

The final projects of students from all five departments of the institute have been put on display. The opening day was abuzz with excitement and joy, as families and friends of the students came to support them.

From puns on socials issues to socio-political commentary, creativity and observation reflected from the communication and design department’s corner. Timsaal Bukhari’s ‘Awami Circus’ used the image of containers to showcase the different political barriers faced by the citizens. The poster not only showcased her eye for details but subtly criticised the current political order.

Along similar lines, the identical bursts of colours were Madiha Rahman’s tribute to the Shah Jo Risalo. Rahman had drawn character sketches of prominent characters from the likes of Chanesar and Sassi Panhun. “I love these tales and have read them all,” said Rahman.

The students of interior design and architecture strived to blend design with greater civic responsibility.
They presented unique models of design and planning to uplift the economy.

Case projects of Darul Sukoon and bus conversion projects for safe travelling were proposed, planned and exhibited. Likewise, a particular student had come up with a scheme to provide better working opportunities for potters’ guild of Kumbhar.

The fine arts students presented some of the most elaborative and creative ideas. Maliha Saleem’s ‘Infinite Skies’ linked the grids and the skylines of the city. The skylines painted in bright light hues of red, orange, blue, blacks and yellow with streaks of black lines were Saleem’s way of connecting the two.

“They coexist, connect and add definition on spaces inspiring my work with colors, hues and linear grids,” said Rehman in her statement.
The canvases proved to be an open ground for experimentation for the students, as they used it to voice their opinions regarding different issues.

Fatima Nadeem’s attempt at linking spaces and identity with watercolours stood out. “People impart their character into space,” said Nadeem in her work detail. She endeavoured to show how the personal and work spaces eventually come to define the identity of the people.

Her portraits of people possessed stories of their own. For instance, a lady with a humouristic spark in her eyes held the message ‘Sugar, spice and everything nice.’ The same way, a portrait of young man with thoughtful look in the eye and grave expressions read, ‘How old you would be if you didn’t know how old you are?’ 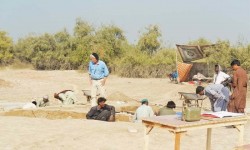 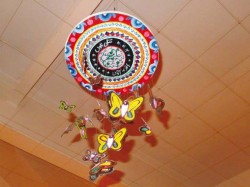 Truck art: Colour, with a dash of humour 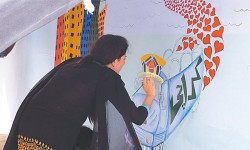