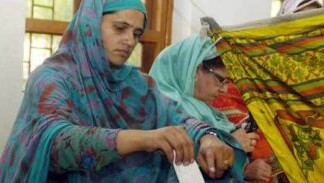 ON March 31, in an unprecedented move two women — Badam Zari from Bajaur and Nusrat Begum from Lower Dir — filed nomination papers for the election.

A former district vice president with the Pakistan Tehreek-i-Insaf, Nusrat Begum is the first woman candidate from Lower Dir, a district where women voters were often barred in the past. Although these two candidates illustrate a positive change in pre-election Pakistan, electioneering remains a male contest. Indeed, women’s lack of voting rights remains a serious problem which begins with the low number of women who are registered as voters.

With 37.4 million female voters and 48 million male voters on the electoral register, ten million unregistered women, according to FAFEN is a glaring instance of gender disparity. They propose that the ECP along with NADRA, political parties and civil society organisations ensure that unregistered women are found and given identity cards. Political pundits believe it is too late for this election.

“The registration of women as voters is the biggest issue. Although non-governmental organisations have tried to minimize this deficit to an extent, NADRA requires valid documentation to prove a citizen’s eligibility for an identity card. Many women cannot produce these,” explains Rashid Chaudhry at FAFEN.

But a CNIC and registration of their vote does not address the entire gamut of problems facing women voters. The latter are also deprived of their vote because of tribal customs; inaccessibility; voter unawareness; collusion of political parties; general insecurity; displacement and migration, and the unavailability of male members of the family to accompany female voters to polling stations.

In conservative districts in Khyber Pakhtunkhwa, Punjab and Balochistan, when it comes to women’s political participation, local political party representatives forge informal agreements to prevent women from voting. Bushra Gohar, the Central Vice President of the Awami National Party, believes that even if there is no such verbal agreement between parties, women do not come out to vote because of patriarchal traditions in Kohistan and certain areas of Mansehra.

In fact, the ECP at the local level becomes party to this. Reports of women voters being kept away during past general elections or local government elections in Malakand, Shangla, Buner, Bajaur, Mohmand, DI Khan, Lower Dir and other areas in Fata with the tacit understating of the ECP are not uncommon.

For instance, in the 2011 by-election in Musakhel, Balochistan, the ECP established a woman-only polling station but the male staff went on strike because they refused to work with women. The ECP had to relent.

“It is socially accepted that women should not vote and secondary ECP staff drawn from local communities did not want to deviate from local customs,” Chaudhry explains.

Similarly in the by-election in Shangla, Khyber Pakhtunkhwa, in January 2011, only about 90 of the 59,177 registered women voted. Women were stopped from voting at 69 combined polling stations and 14 female polling stations as part of an agreement between contesting parties, including the Pakistan’s Peoples Party and the ANP.
“There was evidence that all parties had finalised an agreement which had then been countersigned by the ECP,” says Gohar who had taken the issue to parliament.

Gohar explains that parties in KP believe that if they relinquish control of women polling stations, bogus votes will be polled because women’s identity cards have no photographs; it is easier to stuff ballot boxes with fake votes at women-only stations.

For most activists, such behaviour can and should be challenged by the state – if the colluders are punished, it can act as a deterrent, they argue.

The ECP must exercise its legal authority under the Representation of the People Act, 1976 to prevent women’s disenfranchisement by punishing and fining perpetrators, say constitutional experts.

“This Act gives the ECP power to declare results from any given polling station or constituency as null and void, if anyone there is barred from voting. If this law is not being followed, it reflects the lack of seriousness with which we approach women rights,” says Mudassir Rizvi, the head of FAFEN.

In May 2012, it was also recommended that the Commission be given the right to nullify results from constituencies where local parties have excluded women or where less than 10 per cent have voted and that presiding officers provide separate data on male and female voters.

However, not all experts feel that these recommendations can address the problem. For instance, many believe the 10 per cent quota will be met by proxy voting. But here too, some believe that further legislation can help.

“Thumb impressions with magnetic ink on voter lists can be biometrically scanned. This means NADRA can tell whether bogus votes have been cast and if proxy voting has taken place at certain polling stations. This can act as a deterrent or even be used as evidence during appeals. This would in turn help detect fraud [bogus votes] but the absence of legislation remains the main problem,” Chaudhry at FAFEN argues.

However, political parties have resisted such ‘measures’. For instance they have said that it would be difficult to implement the 10 per cent prerequisite with the existing security risks because of which overall turnout figures will be low.

However, not all political observers are willing to buy into this reasoning including Mohammad Amir Rana, director of the Pakistan Institute for Peace Studies. He claims that the security situation was no different during the 2008 election. The only difference this time around, he asserts, is the increase in sectarian violence, especially between January and March this year, which was confined to certain pockets in Karachi, Hangu and Quetta.

“This time it will be difficult for political parties to stop women from voting because even religious parties in Malakand have agreed to bring women to polling booths for the first time. In Lower Dir, the ECP has six polling stations for women but now each union council has requested one polling station. The ECP can challenge the local leadership – with secular credentials but conservative mind-sets – if women are kept at home this time,” Rana says.

Local activists agree with Rana; according to them the disenfranchisement of women has little to do with militancy and everything to do with gender discrimination.
Chaudhry tells Dawn that he has already heard of an implicit agreement so far in Torghar, KP, a tribal area turned settled district. However, the Chief Election Commissioner Fakhruddin G Ebrahim asserts that the possibility of rigging is nil. He is looking into positioning female military personnel at women’s stations in insecure districts.

At the same time, NGOs and other observers point out that a larger female voter turnout is expected because of an increased turnout at combined polling stations (which women can reach in the company of men); an increased number of polling stations; and accessibility (polling stations are expected to be no further than two kilometers in distance from homes under SC directions).

Last but not least is the support of the more conservative candidates who are counting on women voters. Take JUI-F’s Maulana Rahat Hussain who is set to contest from Shangla, KP (PK-87) and who has endorsed women’s political participation if they conform to veiling themselves and traveling with men. “In the 2002 elections, polling stations were accessible for women as they were established on roads. About 400 women voted at polling stations near Gomori, Shangla and 100 women voted for me at the Shahpur polling station in 2011. No religion stops women from voting.”